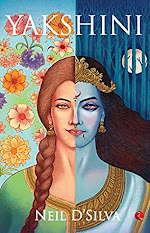 Book Title: Yakshini (Kindle Edition)
Author: Neil D'Silva
Publishers: Rupa Publications
My Rating: *****
About the Author: Neil D'Silva is an author of 12 horror novels and Yakshini is yet another of his books that has been acquired for screen adaptation. He is the President of the Indian Chapter of the Horror Writers Association, and is also a TEDx Speaker.
Let me make a disclaimer before I begin to talk about this book. Even though I am in the author's circle of virtual friends and I've been a fan of his writing since his very first book, this particular book review has not been solicited by the author and neither is my impression of the book biased.
Like I've said many times before, I pick a book by it's cover, quite literally. It has got to be love at first sight! And then a little knowledge about the author and his style helps. Sometimes I veer towards books via recommendations by like-minded friends but I stopped reading back blurbs long ago. As soon as the book was out, I was longing to read it, and then it reappeared in this new avatar which just did it for me! Yakshini was on my mind since very long. Like in the story, any man who lays their eyes on her becomes besotted with her, I think the illustration did have a similar sort of effect on me.
Saying anything about this book can prove to be a spoiler because each scene is an experience. The descriptions of the scenes are so real that it feels like a movie playing out before your eyes. Even though it's a simple tale, it's gripping, it's simply gripping! Neil D'Silva's strong visualisation and flawless storytelling, makes this supernatural fantasy fiction a great Halloweeny treat. #Spooktober meets #Booktober, done right!
Beginning with the Sal tree in Meenakshi's garden who is her benevolent 'Companion' that gives her a shiny gold coin every day, the story draws you into the teenager's life in the unassuming village of Vatgaon. She is no ordinary girl. Blessed with celestial attributes, she has beauty that would rival a goddess, and possesses a unique communion with nature.
After having six daughters in a row, a couple expecting their seventh child, began performing a special yajna to fulfill their desires for a male child. At that very moment, halfway to the heavens in a realm hidden by clouds, a Yakshini was facing a sentence for her folly. By a strange quirk of fate, the two distinctly different lives- the unborn child in the womb and the Yakshini became intertwined, and the result was the birth of  Meenakshi.
Even so, Meenakshi's family is unaware of the special qualities that the child was born with, and she lives an ordinary life in the village. Until, Meenakshi comes of age, and begins to catch the eye of lust ridden men. That’s when the Yakshini inside her awakens.
Meenakshi’s skin increased. She woke up in a sweat. She had come down with a fever, and saw, to her great horror, actual bubbles rising on her skin as though there were some trapped liquid in there trying to boil and burst out. She screamed at the sight, a scream that deadened the howling of some faraway wolves. It was the Yakshini. She wanted to come out now. She wanted to feed. And she told her, wordlessly: ‘I smell a man.’ The moment had come. The Yakshini had fallen off the deep end. She was savage now, a predator, and Meenakshi was her vehicle.

As the Yakshini takes control, Meenakshi finds her old world getting shred to bits, and she is catapulted into a whole new world of passion and violence. She does find a mortal saviour in her husband, but ever his life comes under threat.

There are many high points of the book, which I admire. Indian mythology, urban supernatural activity reports tie in so beautifully with this modern fiction. The research that went into crafting this story makes it a veritable treat. Laden with shades of grey, Meenakshi and Yakshini have been developed so astonishingly well that I was surprised I couldn't bring myself to think of any of them as the anti-hero. Also for a male author to write a woman centric story that revolves around the evils of rape and eve-teasing and sexual molestation. This is no less than a feat that Neil D'Silva has pulled off with amazing grace and utmost sensitivity. Just showing that a good author can work wonders even in this genre of fiction writing, and horror as a genre can be most entertaining as well.

It is difficult to keep a sapling from growing once the seed is sown. Once a thumb presses the seed into pliable soil, fertile with desires and ready to be impregnated, there is no way to stop it from bursting forth and sending its tiny shoot skyward. More than that, it is not naturally possible to prevent the roots from sprouting. And as the roots go deeper inside, they hold on to the soil with greater tenacity, getting nourished by it till the plant becomes a force in itself.

The 'Aah' moment came when I realised that based on the above thought the book had been divided into parts with the various stages used as titles, and the accompanying hand-drawn illustrations add appropriate flavour to the book. This only goes to show the author's attention to detail.

What happened to the old metal trunk in the dusty attic where Meenakshi hoarded all the gold coins secretly? Who was Krita and why did he shadow the Yakshini everywhere? Who were they in relation to the Nagas? What was their story? What had been the Yakshini's folly which turned her into this demonic parasite? And the biggest question above all, what happened to beautiful Meenakshi when the Yakshini living inside her eventually became an open secret?

The mind-blowing answers are for me to know because I have read this wonderful book, and you to find out after reading it yourself.

Looking for a happy scary read, then this book is a must not miss!