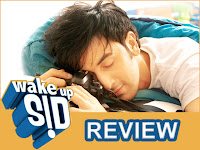 Was wracking my brains for an eye-ball grabbing, big bang opening to this new-born blog and ‘Mirëmëngjes’ has done the trick I’m sure. In Indo-European Albania, the new mum wakes her little one with that, meaning ‘good morning!’.
This reminds me of the latest flick that has clicked at the Bollywood Box-Office, ‘Wake Up Sid’.
The story obviously revolves around Happy-go-lucky Sid Mehra (Ranbir K) and his muskmelon life. The movie- maker takes a dig at the ‘NOW’ generation when Sid takes his father Ram Mehra’s(Kher) hard-earned money and stoic presence for granted and is engrossed in having a whirlwind life. Ranbir’s chocolate face is the plus point in making his character believable.
Aisha Banerjee (Konkana) is a hard-working and aspiring writer who has quit her blissful ‘Bong’ life for Mumbai, in search of independence and recognition. Konkana shoulders the complex role with her trademark poise. Tastefully cast in the role, she has successfully made her character a role model.
Heart rending lyrics by Javed Akhtar and the lilting music of ‘Gunjasa hai koi iktara’ by Shankar, Ehsaan & Loy create a romantic background to the sweetly blooming friendship between the kiddish Sid and go-getter Aisha (who is 5 years elder than him).
Sid the Pizza-junky is pub- hopping Mumbai nights away when realities of life start showing up at his door-step. Sid feels jilted when left behind by his best pals who pass with flying colours in the exams. After being admonished by his father for having failed even at taking up their family business, Sid storms out of the house to seek refuge at Aisha’s flat.
It’s a gripping 2nd half with the 1st part having laid the foundations to a sufficiently dynamic eye-opener twist in the tale. What unravels on screen henceforth is a delightful platonic relationship between the two. Sid struggles to self-reliance and has also to learn to be more useful around the house. The transformation is convincingly acted out by Ranbir Kapoor beginning with the ‘oomphatic’ Kashmira Shah coaching him to make the perfect egg Omlette.
The flawless direction & scripting by young director Ayan Mukerji gets this movie the most thumbs-up! No exaggeration and hamming from actors; An original script with simple, fluent and no ruminant story-telling; True-to-life situations that the audience could relate to!
Naivety in the couple’s bonding, the discovery of a career opportunity, the first pay cheque and the metamorphosed Sid that returns home are high points that leave the audience panting for more.
What Sid has woken up to is a sense of responsibility, the value of the opportunities that life has presented him, unlike most who are deprived of such luxuries.
The realization of his love for Aisha has also finds a beautiful simile in the cool first monsoon shower as a changed Sid Mehra rests at the window-sill of his home!He rushes out to embrace life.
Now that’s a good start! What say?

Unknown said…
watched the movie 2 days before. we were relieved that this one didnt have the usual melodramatic scenes! ranbir was superb in keeping his acting genuine.
Dec 18, 2009, 4:40:00 PM

HR COLLEGE OF COMMERCE AND ECONOMICS.

Both Ranbir and Karan Johar are alumni. Thats how they got permission. Also some of the extras were chosen from my std. Could recognize many of them. It felt good to have them shoot in some other college (MY COLLEGE) than shoot in the usual Xaviers. :D
May 13, 2010, 11:50:00 PM