God is a Gamer: Book review 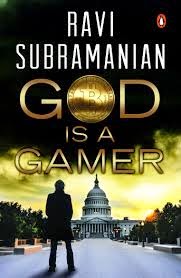 GOD IS A GAMER
Author: Ravi Subramanian
Publisher: Penguin Books India
My Rating: ****
About the Author:
'Banker by day, writer by night' as per Forbes, Ravi Subramanian is India’s numero uno thriller writer, having written six bestselling books. An alumnus of Indian Institute of Management (Bangalore), he is currently head of a leading financial institution. A career banker and financial services professional, Ravi has worked with various multinational banks (Citibank, ANZ Grindlays Bank and HSBC) for over eighteen years. As a result of his extensive background in foreign banks, writing about banking comes quite naturally to Ravi. Each one of his books thus far have been set in the backdrop of a foreign bank.

To tell you about myself, I'm an artist at heart and numbers were never my cup of tea. Me and the finance world are like Poles apart. So its needless to say that I wasn't interested in anything or anybody from the banking world. I will therefore frankly confess that even though I'd seen Ravi Subramanian's previous books on the shelves, I'd steered clear off them because of the sheer reason that his stories were based on banking.

However the mention of BITCOINS - supposedly a software-based online payment system that potentially threatens to replace plastic money, had me intrigued. I'd read before that the concept of Bitcoins had been created by Satoshi Nakamoto whose true identity remains unknown and is a subject of great speculation. It is also not known whether the name "Satoshi Nakamoto" is real name or a pseudonym. Whether this name represents one person or a group of people is also not confirmed. This puzzling background had me wondering what the book may offer as it was touted as the world's first Bitcoin thriller. And thus finally I decided that I wanted to read this book by Ravi Subramanian.

Extremely thankful to BlogAdda for promptly sending this book across. You are truly my book genie!

The blurb on the back reads 'What happens when you cross Gamer, Banker, Politician and Terrorist with virtual money?' And it really gets you wondering how is that even possible? Once you start turning the pages, the reader is definitely going to be hooked for good. You are welcomed into this thrilling world with a prologue that gives a peek into how the plastic money world operates. For a person like me who knows absolutely nothing about the finance world, this book absolutely spares you the rod. There's no jargon thrown at you but in fact this book will definitely educate you on many concepts in a simplified English.

The thrilling story begins in 2011 where Senator Gillian Tan from Washington DC, an old pal of the President of the United States of America is assassinated using a cycle bomb. Each new chapter is just 2-3 pages long making this book of 310 pages a quick read and giving the story a fast pace in progression. The story moves from Washington DC to the beaches of Rio de Janeiro and Goa. And this remains the style throughout the book where the story shuttles between cities and states in India and USA, from Mumbai to New York. However I did not understand why Chapter 2 had to be based on Prime Minister of India's office at New Delhi? It never found any mention later in the book.

New names kept getting introduced right up till Chapter 82 in the book. So the book proves to be absolutely 'un-put-down-able'. Not only because of the interesting and well-developed plot of the thriller but also because you may lose track of who is who, if you take a break. I had to spin back a few pages to give myself a revision since I'd taken a break from reading the book to finish my daily routines and chores. In my opinion this happened especially because the story-telling involved so many characters but did not dedicate the necessary  amount of words to describing each character in physicality and mannerisms. I feel adequately detailed character sketches are most essential since it helps the reader build a mental picture of each person involved in the plot and does not land up drawing a blank at the mention of a name some pages down the line. This element was sorely missed!

Initially, I did not see why so many characters were involved in the story telling but when the author began to tie-in and connect the seemingly disjointed people, I was impressed. The plot thickened and began to get a little darker too, keeping me at the edge of my seat and wanting to know how Agent Adrian Scott and Tony from the FBI were to get to the root of all the evil?

Being an avid blogger, Facebook and social media junky all the ideas discussed in this book  had definitely popped before my eyes time and again. WikiLeaks and Phishing cases, ATM heists and cyber crime, drugs and politics, online gaming portals and their downloadable mobile apps are all terms that one is not alien too anymore if you have spent sufficient time online, browsing posts at FB and elsewhere. However linking up all these myriad concepts to build a seamlessly thrilling story of murder and mystery is unfathomable. Hats off to Ravi Subramanian for hatching an unbelievably awesome plot and convincingly weaving it all together, piece by piece. The amount of effort and meticulous research gone into writing this novel, clearly shows.

Its however very surprising how the author has gone ahead and mentioned such gigantic brand names while portraying them in bad light- Visa and Mastercard, Dell Computers exploding like bombs in different continents. Tanya is gifted a Tanishq ring by Varun, they celebrate Malvika's birthday party at Four Seasons in Mumbai, Tanya carries a Hermes Birkin handbag. Why does it sound more like advertising rather than detailing to build a background to the story?

Though this book can easily be labelled as an excellent read and a complete entertainer, I did find a few loose ends that could have been given more attention to. The epilogue brings a swift closure on each aspect of the story, giving a glimpse of what each character is going through after Adrian and Dan have cracked the mystery wide open. However, why did I get a strong feeling that the author was in a rush to close the mystery? Also I waited till the very last page for the word God to figure somewhere. How was HE involved in all this? And why has GOD been framed as a gamer in the title of the book, I fail to understand!

I expected a Penguin book to be much more tightly skimmed for typo' errors. I spotted a couple of grammatical  errors in the first half of the book too but only began to take note in the latter half. 1)  Pg. 236 - 'Three of his neighbours, who has seen the ghastly attack, went along with him and signed off as witnesses.'
2) Pg. 261- 'This in a disaster.'
3) Pg. 286- 'Can you please explain Ms. Tanya Sehgal, how that bottle came to be ('in' missing) your bag?'
4) Pg. 304- 'They had started seeing each ('other' missing) after the party.

Chapter 99 finally reveals how the crime was plotted and who the actual Mastermind was. The biggest twist lies at the climax and the enumeration is magnificent. The last few paragraphs sums it all up by showing how despite all the murky business, its the emerging world of Bitcoins that is poised to take over the finance world, making millionaires out of commonplace people if you are intelligent enough to cope with it.

Partha said…
So you do have a second blog Vibhuti..I was wondering from when you started reviewing books...I liked the book btw..here's my review

Vibhuti Bhandarkar said…
Hi Partha,
so happy to see ur comment.
And Lol! Yeah, this is my original avatar. I've always been a writer, reviewing blogs and movies.
All other blogs are either assignments I'm working on or hobby blogs.
Hope to see more of ur comments

Hopping over to ur blog now...
Thanks a ton once again.
Vibz