The Guardians of the Halahala- Book Review 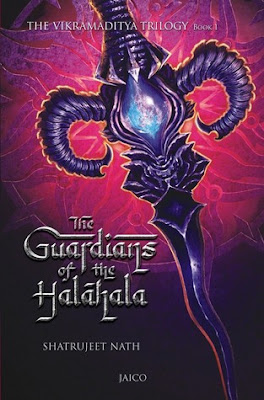 Book Title: The Guardians of the Halahala
Book 1 of The Vikramaditya Trilogy
Author: Shatrujeet Nath
Publisher: Jaico Books
My Rating: *****
About the Author:
Besides exploring various business opportunities Shatrujeet Nath has written ad copy, and reported on business as a journalist and assistant editor at The Economic Times.
His first book, The Karachi Deception, was published in 2013. The Guardians of the Halahala, his second book, and the first in The Vikramaditya Trilogy series, was published in 2014. At present, he is writing The Conspiracy at Meru, the second volume of the trilogy.

Like a true blue Indian Mythology fan, one of the first few stories I grew up listening to and demanding of my mother to repeat every other day at bedtime, was that of the 'Sagar Manthan' or 'the Churning of the White Lake' as Shatrujeet Nath calls  it. I remember being enthralled by the story of how Lord Shiva of the Holy Trinity drank up all the poison or Halahala, to save the world from annihilation. Coincidentally, I still have a tiny story book in my collection, also from the Jaico Publishing House that I was very attached to as a child and remember having read it over and over again. Undoubtedly my favourite, that book was titled 'The Great Throne of King Vikramaditya'. Now you can very well imagine the kind of excitement I must have felt when I spotted all three words on one book cover- Halahala,  Vikramaditya and Jaico!

The Guardians of the Halahala opens with a map of Sindhuvarta and I'm already loving it. For me, maps attached with tales of a bygone era instantly transport me into the imaginary world, making the fictional tale a tad bit more believable already. There's also an Index of Major Characters that follows, segregating and listing the Humans, Devas and Asuras. A fleeting glance on this list and their quirky descriptions had me intrigued. The Index also told me, what a keen eye for detail the author had. These elements clearly confirmed that much thought had been put into the development of this saga.

I just love this current trend where old Hindu mythological stories are being retold. There's a contemporary style of narration and the authors take the creative liberty of breaking away from the staid age-old beliefs established through legends. However the real beauty of Shatrujeet Nath's story telling came through when I began to forget the old and got completely absorbed by the new.

The Halahala was not completely destroyed and a small portion was sneaked by an Asura called Veeshada and incorporated into a weapon that would guarantee victory over the three worlds to whoever possesses it. Once the knowledge of that dagger is in the open, both the Asuras and the Devas covet it.  Lord Shiva turns to mankind to safeguard it from their murderous clutches and calls upon Samrat Vikramaditya  to protect Veeshada's dagger that had been lying in his custody. How the Samrat and his Council of Nine fight the forces of the Devaloka and Patala, led by Indra and Shukracharya respectively is definitely a masterpiece of a tale spun by Shatrujeet Nath.

The tale of 'The Guardians of the Halahala' has numerous high points like the attack by the Maruts. The descriptions so vivid and the characters are so strong that I could see the battle scene unfold before my mind's eye. Oh! How beautifully the legend of Samrat Vikramaditya and his Council of nine or Nine Pearls has been revisited and presented in a new light. Amazing command over the language, apt usage of a rich vocabulary, a multi-layered but intriguing plot that unravels at a steady pace in all directions, together make for what we can easily call one of the best works of good Indian literature. Such penmanship  is surprisingly rare to come across among the present gen' of Indian authors.
My favourite among the myriad impressive character sketches is that of the Mother Oracle. Though a comparatively smaller role to play, she adds that lovely flavour of mystic. My most favourite part of the book was Vikramaditya's journey into the Borderworld. What powerful imagination and creativity taken to another level with the Ghoulmaster.

"Good books don't give up all their secrets at once."- Stephen King
I think the author has taken this quote to heart while writing 'The Guardians of the Halahala', for every chapter that I finished reading in this book only left me more intrigued and wanting to read more. What happens to Vishakha? Does she recover completely? Will Vikramaditya be able to save Veeshada's dagger and keep it out of the Devas or Asuras hands? Will he be able to keep the Hunas and Sakas at bay while a huger task of protecting the dagger threatens his life? Does the war waged by Magadha on the Vanga in the south affect Avanti's future too? Will Shukracharya's real identity be ever revealed? Book 1 of the Vikramaditya Trilogy is a cliffhanger in entirety but I'm not complaining because I have grown up reveling in mystery and mythological stories. This book series here promises both! And that Shatrujeet Nath is able to keep the mystery and awe built up till the last word of the last page is a feat in itself.

Try as I might, I'm not able to see any negatives in this book. Really! Only a nitpicker would be able to point out incomprehensible flaws in the narration. However I do wish there was more about Samrat Vikramaditya and his grandeur too. Read a lot of stories revolving around his magical throne so was looking to find that element woven into the fabric of the story. Would have loved to read more of the Ghoulmaster and the Samrat's interaction too, but guess this is just the first book in the trilogy and there's a lot to look forward to in the sequel!

It was a sheer delight to have received an author signed copy of the book and I must say that I'm in awe of the author's storytelling skills. Definitely, absolutely, looking forward to the next book in the series.

Happy to declare, we have yet another MUST READ story series to collect and flaunt on our book shelves!