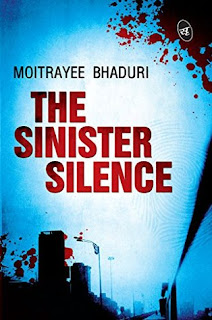 Book Title: The Sinister Silence
Author: Moitrayee Bhaduri
Publisher: Srishti Publishers
My Rating: ***
About the Author:
This is Moitrayee Bhaduri's debut as a novelist. A content specialist by profession, the author has graduated with History Honours and has completed M.A. too. Moitrayee loves animals, and singing travelling and watching Cricket are her spare time interests.

Last month, a contest was organised in one of the Facebook groups called FWBA- For Writers by Authors and the Top 3 book cover designs were to be picked. Being a professionally qualified graphic designer for more than a decade now and an active member of the group, I was asked to pick my favourites from the 40+ entrants.And rest is history!

I picked 'The Sinister Silence' as a winner because this cover design emotes like a back blurb talks for the book. Though the individual elements used on the cover are undoubtedly clichéd, one cannot deny that the treatment has rendered them indeed effective, as a whole. Where there's a blood splatter a murder mystery is inevitable and where there's mystery, aren't finger prints integral to the investigation? The subtle watermarked fingerprint on the cover creates the awe and intrigue for the 'Sinister'. The silhouette of the buildings suggest the corporate sector and that the story must start in the wee hours. Once the back blurb is read, you would now how apt the cover design  is! +1 star for the great book cover design by Raja T.

I gravitated towards the book and the author drew me in with a great Prologue. The book starts with a charmer of a man called Saahil Kerkar driving home through another of Mumbai's torrential rains on the evening of 4th of July 2014. The good Samaritan that he is, he also offers a lift to his colleagues from Zarine Software. The story takes on the avatar of a murder mystery when Saahil is found in a pool of blood inside his car, in the wee hours of the next day- 5th July 2014.

Ex-super-cop-turned-detective Mili Ray has founded a new private detective agency called Kwest and her team comprises of Advocate Gatha & an ex-army officer called Anubhav. The trio dive into the case headlong and manage to 'crack the motive' before the police officer in charge ACP Purab Trehan. As the book progresses, a string of murders are committed and they all seem to be linked to the first case.

The treat for me in the book, were the choice of names of the various characters. The author has obviously taken some pains in selecting the names and also researched the backgrounds on it. My favourite character was the next in lead- Morena Dave. She not only has a unique name, she has some cute nicknames too like Mornie. This is yet another major score from my point of view. As a reader I appreciate the intelligence and attention to detail shown by the author. It helps us distinguish the characters one from another, and visualise them along with their physicality, their traits, etc. By the end of the book, we read about a very interesting hobby inculcated by Morena. It added flavour to the book, or must I say 'fragrance', in this case?

Mili Ray a very keen detective has one healthy habit and a vice too to make her real as ever, in the reader's minds. Mili chomps on apples and smokes too! I would like to find out that the author has plans of expanding this character over a series of murder mystery books.

It has been quite a while since I last read a good Indian murder mystery story. With stalwarts like Ashwin Sanghi having published a book in the same genre, and him being one of my favourite authors, Moitrayee Bhaduri's 'The SInister Silence' did have a lot to stand up against. So I must applaud this book as a good read and a great book by a debutante author.

One of my pet peeves that I spotted in this book was direct Hindi-English translated phrases seeping into the narration. At one instance, one of the investigators comments something like, " I think he had a hand in this." A little tighter editing could have brought this book closer to being flawless, as far as Grammar is concerned.However it is indeed a relief to read a book where bombastic words have not been force-fed between some good prose.

The twists in the tales are aplenty and the plot in fact thickens during the unraveling of the mystery at the end. That's what I think will set the book apart from the rest. What I sorely did miss was the 'Sinister Silence' as the title had promised. I was really looking forward to some eerie or close to paranormal experiences woven into the storytelling. Or maybe it was wrong on my part to presume that this murder mystery would have so much hidden between its 271 pages.

Like the back blurb states, this book is indeed an edge-of-the-seat thriller that I enjoyed reading.

* This is an author requested book review but I promise that this is a genuine book review for my blog's followers, posted at my own free will.
I have read and reviewed this book as a part of my #BrunchBookChallenge for 2016. This book also checks off as Book#9 as per my  own Book Reading/Reviewing Challenge 2016
#BrunchBookChallenge Author book Book Cover design Book review Detective series murder mystery

Best Event Planner said…
I am completely agree with you, I am an amazing fan of your site, genuine guard post Keep making such stunning post,