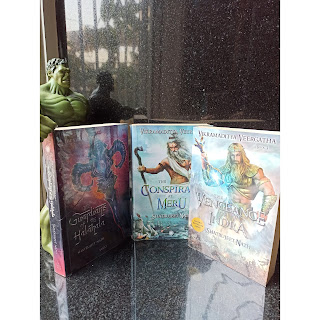 The VIKRAMADITYA VEERGATHA Book Series will be complete with the release of the 4th book- The Wrath Of The Hellfires in December. The book is available for pre-order on Amazon now!

VICTORY IS TEMPORARY. THE BATTLE IS ETERNAL.- The Logline of the book itself told me that Vikramaditya and his Council of Nine would have many hurdles to face as the Guardians of the Halahala. The story was getting more interesting!

The author has successfully created a world that was much beyond my imagination and far more layered than any Indian mytho- fantasy fiction I've ever read. I won't be exaggerating if I say that the book is worth reading for the most elaborate, and well-articulated battle scenes. The attack of the Vyalas- mythical creatures is one of the most gripping passages, the Maruts fighting back valiantly with their spine-swords, the Ashvins with their lances. Since I am a great fan of the mystical and esoteric, The Mother Oracle had become a character I looked forward to reading more about. Shanku is definitely my favourite of the NIne councellors, and King Vikramaditya's unwavering love for his bed-ridden wife Vishakha is what makes him more and more lovable.

Ujjayini lies battered, its citizens are scared and morale is badly shaken by the attack of the Ahi- another fantastical creature released by Jayanta, the son of Indra. Meanwhile, the barbaric Hunas and Sakas are gathering on the horizon, while Shukracharya is scheming to break the unity of the invincible King Vikramaditya and his Council of Nine. As the story progresses, the council members are discovering and learning to wield their powers. Each character has been developed so beautifully and there are such fantastic highpoints which intrigue and wonder in the reader's mind.

This is what took the story to the next level, evolving into a trilogy at first and then into a full blown 'Veergatha' - a 4 book series.

VENGEANCE IS A CAGE, FORGIVENESS IS FREEDOM-

By the release of the third book, it had emerged as the Vikramaditya Veergatha series which soon became a National bestselling Mutho-fantasty fiction series. Since we stand at the anvil of the release of the final book 4- The Wrath of the Hellfires, I found it inevitable that I re-read Book 3 to get back into the loop of the story. And now I cannot remain calm, anymore!

Book 3 opened and immediately reminded me of my childhood fascination of King Vikramaditya and his infamous Betaal. It had to feature! The author has skillfully notched up the thrill and action quotient in this book. I find it extremely clever of the author to have developed an entirely different language that the Hunas wearing the mark of the Hriiz on their foreheads speak. The Ghoulmaster is sure to create dread in your hearts.

The author Shatrujeet Nath has also woven different Indian mythological characters into the fabric of the quest, but the storyline still remains fantastically original. Not one scene ever predictable. Not once will the reader ever be able to say that a particular character had been written from the start in a pre-cast mold. It is mind-blowing to see how the story twists and turns while the proverbial noose tightens around King Vikramaditya's neck.

As the title clearly suggests Lord Indra is at the core of the story bearing an old grudge and a devastating new weapon. Protecting the Halahala from the Asuras- a responsibility given to King Vikramaditya by Lord Shiva, is getting more and more difficult and the wily Shukracharya manages to chisel away at the unity between the Nine Council members. Vikramaditya's friendship with the giant poet warrior Kalidasa is about to crumble. Its absolutely heart-breaking to read how slowly each of the nine are beginning to drift apart.

So many questions in my mind as I eagerly wait for Book 4 now, besides the biggest question- will King Vikramaditya be successful in his mission, and meanwhile also be able to unite his Navratna together again? Will Queen Vishakha finally rise and is there going to be the quintessential happily ever after?

All in all, Vikramaditya Veergatha series is definitely a MUST READ for fans of this particular genre. If you haven't read it, you are missing out on one of the most brilliant works of our generation of Indian authors has produced in English Literature.