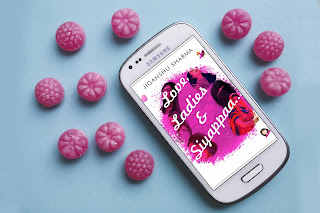 Originally a Punjabi-Urdu word, 'Siyappa' means wailing loudly when one has fallen into trouble, but this word is largely used like some sort of a cool word. Hence I was expecting more humour from the book, going by the 'Chick-lit' like look of the book-cover.

Here is a collection of 6 short stories written by the author which are based on the North Indian culture and society, presented along with a few articles by other women. This book touches upon the different scenarios revolving around intimacy issures and physical abuse. The author has tried to question the coercions women face, and secretly suffer but are never allowed to raise a voice against.

The first story addresses the age old problem of the stereotypical MIL's obsession of having her Daughter-in- law produce an offspring on demand for the sake of the family's misplaced pride. In my opinion, those irrelevant  emojis placed at the beginning of every chapter,  gave an amateurish touch to good fiction.

While the second story is a typical North- Indian urban story of a school going girl who grapples with the menace of having rejected a toxic BF's sexual harassment. The author very considerately provides a glossary for the juvenile slang words used like 'on fleek', 'darking' etc.

I liked the third story in the collection; of how the aged and devoted wife Faiza goes looking for her own 'Absolute Life' after she's forced to accept her husband Ashraf's second wife, his second marriage being perfectly acceptable as per their religious norms.

The book has been written to sensitise society towards 'what women want' but then women already know. The book needs a cover that men will also pick it up and read!