- March 27, 2011
...And neither did I know that theres anything named like this until I spotted this bird, lurking in the branches.
What an amazing sight! Wish my lens was good enough but I watched it to my heart's content. And I am sure it's keen eyes were staring right back at me. These birds are always so alert that even if I make the slightest sound I soon find them looking at me, into my lens..:D 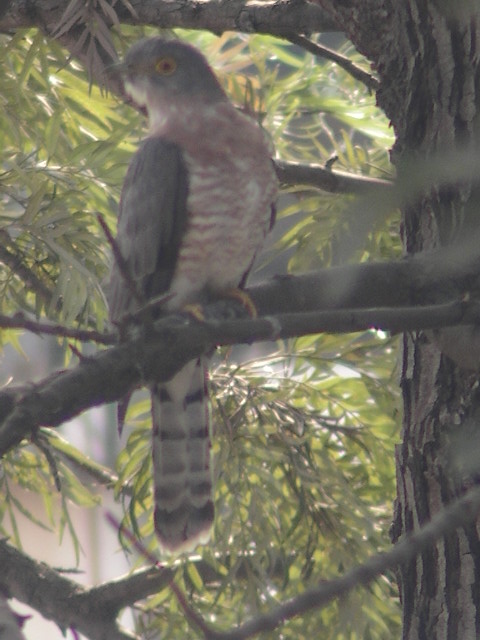 The Brainfever bird, is a medium sized Common Hawk Cuckoo. I don't know whether it is just me or is there an uncanny resemblance with the Shikra and the Asian Koel? Maybe the similarity to these birds gives it the categoric name Hawk-Cuckoo.

Learnt at WikiPedia that this bird is a brood parasite, laying its eggs in the Babbler's nests.. 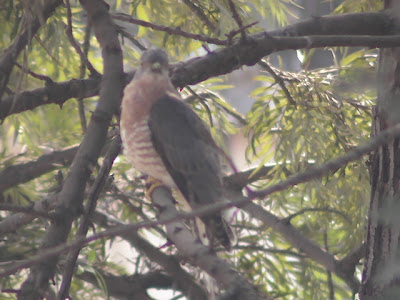 Another question occured in my mind, Why would they be known as the brain-fever birds? And I found the amswer at WikiPedia again..
During their breeding season in summer males produce loud, repetitive three note calls that are well-rendered as brain-fever, the second note being longer and higher pitched.These notes rise to a crescendo before ending abruptly and repeat after a few minutes, the calling may go on through the day, well after dusk and before dawn.
In fact that weird sounding bird-call was what drew my attention towards it. And the minute I spotted it through my cam' there was a sudden pin-drop silence. Felt like it knew the bird-watching rules too!!!
LOL

Interesting FACT about this bird: The type locality of the species is Tranquebar in Tamil Nadu, once a Danish settlement and from where a specimen reached Martin Hendriksen Vahl who described the species in 1797.
Courtesy WikiPedia again

Dr. Ajay Pradhan again at the rescue for recognising this bird!!!

The Fool said…
Nice one, Vibuthi. Welcome back to blogging. I do no know if I have mentioned to you that I too am fond of bird watching. I got Dr. Salim Ali's book and another book and a pair of field glasses and started out but not had time to actively pursue. How do you manage to photpgraph the birds? Bird flies away if I get near enough to photograph and if I try zoom, slight shake screws up the picture. I have to content with seeing through field glass, remembering and then browing through the books to identify based on my memory,
Mar 27, 2011, 3:17:00 PM

Vibhuti B said…
Oh thats is absolutely wonderful Karthik,
We have another interest in common then.
Guess the place I stay is abundant in trees around and being some Kilomtrs away from a lake we have many birds visiting us. And I usually go out into the balcony when I here a different call in the background..:D
And after some intense looking with naked eyes I spot them.
I have a Sanyo Handicam with not such a great lens but quite a good zoom.
And I assume my hands are steady so I manage to get a pic.

The trick is to see that your body forms the Tri-Pod shape.
Like one would stand for wicket keeping and then steady yourself and go click!!
Two three attempts and I have usually landed a good capture..:D

Nethra_A said…
I always try to shoot (of course using my cam :P) the sparrows that sit outside my bedroom's window but a small sound and they fly away. Good that you managed to take the photo. And I still don't understand why it is called Brainfever bird.
Mar 29, 2011, 5:15:00 PM

Vibhuti B said…
Nethra,
You have to be more patient and almost inconspicuous to click sparrows.. The smaller the birds, the more restless they are!
And with a little imagination you will know that a high-pitched repetitive call, all day will irritate you. A feverish frenzy in the bird may have got it its name!!! :D
Mar 31, 2011, 9:11:00 AM

Someone is Special said…
Nice capture Vibzz.. and glad to know about the bird.. congrats on getting featured in News Paper, read the article, SmileS..

Simon said…
Hi Vibhuti,
to get closer to the birds, talk softly. If the bird sees that you are making yourself conspicuous but not threatening, it will relax.
Do not walk straight towards the bird, walk at an angle and look down as you move. Eye contact is predatory and threatening.
Try to make the bird come to you. Make pishing and squeaking noises to pique the birds interest. Be careful in the breeding season as this may disturb the birds when they are nesting.
Jun 15, 2011, 11:21:00 PM

Vibhuti Bb said…
Dear Simon,
Thanks a ton for this most valuable birding tip..
Im an amateur and this most definitely will help.
I havent been blogging for a long while but the birder in me isnt snoozing..:D
You have given me a push forward..Wish you all the luck..
And Thankyou once again...TC
Jun 16, 2011, 12:44:00 PM