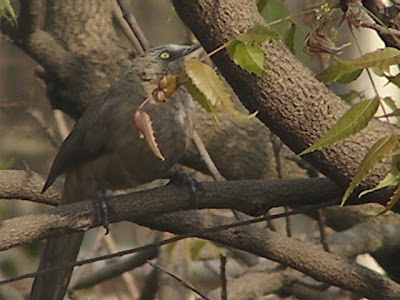 Again as identified by Dr. Ajay Pradhan this bird my lens captured is The Jungle Babbler, Turdoides striata, a gregarious bird found mostly in South-Asia .
An interesting feature about this bird is that it usually forages in a group of 6-7 birds and hence has acquired its Hindi nickname 'SaatBhai' or 7 brothers.... 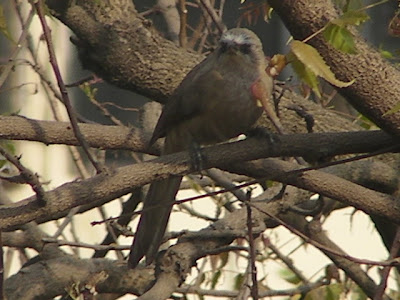 The Jungle babbler  is a non-migratory bird and has a harsh nasal call...Read more about the bird at Wikipedia.
My observation is that its grey-brown body helps it camouflage in the urban surroundings and the trees but its noisy habit of  mewing calls, continual chattering, squeaking and chirping keeps it from being inconspicuous...
birding Hobbies Nature Photography

rocksea said…
oh so saath-bhai is the name in hindi? we call them seven sisters :)

they have a wonderful system, there will be a few of them on the ground, feeding, some of them on the lower branches, some on the upper branches on watch. if there is any threat, the upper ones squeals out and they all fly away.
Feb 11, 2010, 5:02:00 PM

Vibhuti Bhandarkar said…
@ Vivek..I could be of some help!!