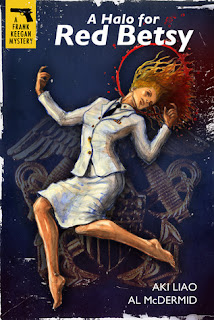 Al McDermid was born in Michigan, where he spent most of his life until joining the U.S. Navy upon graduating high school. Remaining in Hawaii when his tour ended, he attended the University of Hawaii at Manoa, where he graduated Phi Beta Kappa, receiving his B.A. (1990) and M.A. (1997) in History.

There's a story in how they wrote their debut novel too which is worth reading:
Aki Liao and Al McDermid met as graduate students of the History Department of the University of Hawai’i at Manoa in 1990. They met again in New Jersey in 1998, at which time they decided to write A Halo for Red Betsy. What an amalgamation of their individual strengths!

If I could, I'd give another +1 * for this book, for its amazing cover. Just loved the illustrated cover done by Mark Smylie, an  award winning comic book artist. Absolutely fantastic and does full justice to the story and book title. It also immediately sets the mood for the murder mystery that is to unfold in the book.

Frank Keegan is a U.S. Navy Gunner's Mate and former San Diego Police who has returned  to Hawaii after serving a four-year tour with the Military Police in Occupied Japan but is looking forward to mustering out of the military. I loved the way this character shapes up before the reader's eyes. There's a whole lot of showing, not telling which nails it for me! The story is set in 1949 and everything, from the language to the descriptions set the mood and successfully transported me to that time in American history.

If it was a paperback I was reading, I'd say this book is 'unputdownable'. This E-book actually played a key-role in converting a die-hard paperback lover to an E-reader. I was so averse to reading E-books before 'A Halo for Red Betsy' happened to me. I have grown up reading murder mysteries and detective stories, starting with Nancy Drew & the Hardy Boys collections as a primary reader, moving onto Agatha Christie's books as a High School student and graduating onto Sidney Sheldon. For a long time I believed there can never be another like Poirot but Keegan comes very close to breaking that notion for me. He brings a whole lot of romance into the risky business. I would venture out to call Frank Keegan the 007 of a bibliophile's world. If this ever flourishes into a full blown series of books, I'd be proud to say that I'd read the very first mystery he'd solved.

Frank Keegan gets involved in the the murder of Navy Lieutenant Elizabeth "Betsy" Vale within hours of coming ashore and gets picked up by the Honolulu Police. Although his former commanding officer, the current commander of the Pearl Harbor Naval Base, pulls him out of the frying pan quite quickly , he also pitches him back into the fire by appointing Keegan as the detective to solve the case and help clear the charges against the police's prime suspect, Betsy Vale's fiance, Lieutenant-Commander Guy Beaufort.

What I most enjoyed while reading the book was the Hawaiian Creole English, known in Hawaii as Pidgin. The dialogues sound so very authentic and add flavour to the book. It also goes to show that a certain amount of research always goes into writing a good book and it always shows in the quality output! An absolute entertainer, this book kept me on the edge with its pace and style of storytelling. Never a dull moment!

So many interesting characters woven into the fabric of the story with an eye for detail and not a single piece felt out of place or forced into the scene. Sergeant Joseph Takeda (a veteran of the famed 442nd regimental combat unit, Lieutenant-Commander Guy Beaufort who needed a bit of anger-management, Chin- the Chinese gambling boss who seemed to have set off goons on Keegan chasing $10,000-missing bunch of betting money. All kept me wondering and reading, trying to beat Keegan to the real murderer and the motive for the murder for the deceased "Betsy" Vale is spoken of as an extremely kind and helpful person.

As Keegan tries to trace the murderer with bits of seemingly useless clues like one half of the gold oak leaf- a lieutenant-commander’s insignia and Betsy's missing handbag, he find himself in the middle o f a bitter dock strike, caught between a union organizer (and possible Communist agitator) and a Red-obsessed Federal agent. The plot thickens but he finds some romantic liaison with  a loose boozy officer's wife, a morphine-addicted former Navy nurse (and friend of the deceased), and a foul-mouthed young hooker. My favourite being the many rendezvous with Juliet Flynn- the Cheongsam wearing blondie.

How Keegan unravels the mystery undoubtedly involves a whole lot of  chasing, gunning down and bullet wounds too. But (here comes the spoiler)- there's some poetry involved too! Nah, even though I have written that now, you won't be able to guess who the murderer is until Keegan nails it! I like how the authors have done full justice to the book by keeping it a difficult guess and splitting it wide open at the correct moment.

Thankyou Al McDermid for giving me a chance to read your book.  And I cannot thank NaNoWriMo 2014 enough for putting me in touch with Al McDermid.  Without being biased, I can easily say that 'A Halo for Red Betsy' is one of the best murder mystery books of our times.  I highly recommend this book to all who love to read books in this genre.