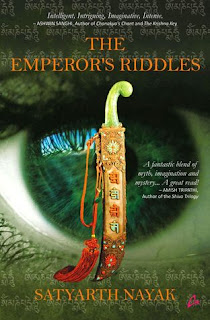 The grand new year 2016 begins and I am posting the very first book review of the year. Now you may wonder why I refer to this year as 'grand' already? It is the effect of this book, I say! Open your eyes and see the numerology.
I have always been a great fan of the esoteric. The mystery and magic, the aura wrapped around it intrigues me to bits. So did this book with it's opening chapter that heightens the importance and the enigma around the magic number NINE!

Would you have imagined that it carries an ancient enigma so powerful that even gods would kill for it?
There have been not one but a string of savage murders!
Renowned historian Ram Mathur's face is carved with the symbol of an AUM on one cheek, an eye gouged out with acid but he still dies on the ghats of the mighty river Ganga with a beatific smile pasted on his face. What happens next is not only the investigation of the case by police officer Parag Suri but also Mathur's only daughter Sia's desperate quest to track the murderer. Sia believes her father had preempted his sordid end and indicated that she seek help from esoteric writer & friend -Om Patnaik.

Except for the earliest gory description of Mathur's murder, there's no more gore as the book progresses. However, what follows is quite a brain wracking series of poetic riddles. Sia and Patnaik have set off to hunt the perpetrator down but find themselves traveling all over India, solving one puzzle after another set before them by a mysterious order. The settings are all icons from Indian history, the background of the nine primeval sciences that take the reader through multiple thrilling facts and figures. The storyline however is a strong reminder of Dan Brown's Da Vinci Code.

How Satyarth Nayak's book stands out for me from it's foreign predecessor is the narration of a parallel story within the same novel that's about an emperor who's story also links in with the same enigma that has our protagonist duo in a quandary.

My favourite character in the book is that of the grey haired Jasodhara with her OCD for a dust-free home. She seems to have drunk up Indian history like a vial of potion for she's like a walking talking encyclopedia! Jasodhara plays a pivotal role in solving the puzzles to the enigma, rattling off facts and figures faster than any one could ever expect.

The only downside of this murder mystery for me is that that author has not given importance to descriptions and development of the primary characters. Everything is happening just too fast for me to swallow and digest. How I wish he had taken his time to unravel each puzzle, let Sia and Patnaik bond a little more through their struggle and strife. The present treatment leaves me pandering for more thrill and passion in the folds of the storytelling.

Satyarth Nayak's The Emperor of Riddles flaunts the high praise received from my favourite author Ashwin Sanghi on the cover, and Nayak's style of writing also kept reminding me of the latter's style of narration too.

To sum it up, this is definitely a great one time read for murder mystery lovers but for lovers of history there's a whole lot of thrilling facts to visit and revel in. Take a peek into the mind of a knowledgeable and intelligent Indian writer who shows much promise for the future of Indian literature. 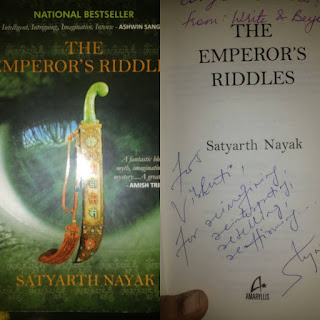 I received an author signed copy of this book as a prize for winning a short story writing competition organised in the last quarter of the bygone year. Satyarth Nayak's handwritten a sweet message to me probably after reading my story that was based on Buddhist mythological story- Angulimala which has also found mention in his book. He writes, "For reimagining, reinterpreting,retelling, reaffirming."
Thankyou for the inspiration Satyarth Nayak and also for penning such an entertaining novel.
Kudos and good wishes for you too!

* This review has not been requested by the author and is a genuine book review for my blog's followers, posted at my own free will.