#1 The Bed of Peonies 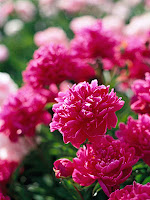 The peonies were looking exceptionally beautiful this morning. She stood bare foot on the neatly trimmed lawns, her dainty feet sinking slightly in the soft earth. A single pearl hairpin kept her long and lustrous black locks in place. Her silken crimson robe also had Poenies profusely and intricately embroidered on it with the finest golden threads. She made such a dramatic sight, looking like the queen of the flowers herself.

On this Chinese New Year’s day kings and envoys from the length and breadth of Asia would assemble to pay homage to their Emperor Lao Zhung. Inside, it was hustling with activity. Preparation for the grand welcome ceremony for so many guests was afoot. Sound of laughter and excited chatter between the ladies trickled to Wu Zhung’s ears. Outside, she stood wearing a look of disdain on her face. Her eyes lacked the gleam and her drooping shoulders said something was amiss.

Wu Zhung was a vision of exquisite beauty. But her steps were slow and measured. From between her thick eye lashes that contoured her tightly shut eyes slipped a tear drop. Rolling down her smooth fair cheek it fell to the shrubs and was lost between the dew drops in no time. As she bent to smell the flowers, she appeared to be searching for that lost tear drop. Wu Zhung felt the flowers didn’t smell as lovely as before.

She stood forlorn between the bed of peonies, humbled by destiny!

T F Carthick said…
Wow! Chinese period fiction. Nicely written. Descriptions were vivid and full of life. Guess it is going to continue. Looking forward to read the rest. Couple of feedback. Somehow saying 'Chinese New Year' seemed out of place in period fiction set in China. Maybe you should have said something sounding more with the times and place. And second the piece was too small. Felt it should have been a bit more content here to pique the curiosity of the reader more. This was a bit too short I felt to fully grip the attention of the reader and ensure he comes back for the ext part.
Jun 24, 2010, 9:31:00 PM