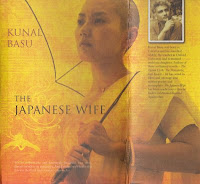 I just finished reading Kunal Basu’s Japanese wife.  It’s a short story that revolves around a shy Snehamoy Chatterjee, a methematics teacher at a secondary school & his Japanese pen pal Miyage. With the progressing number of letters and increased frequency in the exchange of gifts between them, they eventually fall in love with each other. What unfolds is an unreal love story. I just couldn’t bring myself to accept that it is possible that a Sneha (as the Bengali BabuMoshai  is referred to) in reality could maintain a long-distance relationship over a decade. Especially that he goes to the extent of even considering Miyage his betrothed wife and vice versa when they’ve never met each other in person.
When in real life, we are seeing, scores of real husbands and wives can’t resist from cheating on their spouse when he/she is away, this piece of fiction is about Sneha & Miyage who preserve a chaste relationship despite the distance and passage of time. Their love, lives, flourishes and bonds over written words, only through letters.
The commitment they show over a decade despite no wedding ritual or ceremony, ( neither Indian nor Japanese) having taken place between the two, is unbelievable!
Then Snehamoy’s aunt intervenes and brings along Sandhya, a widow and her 8 year old son to stay with them.
The arithmetic teacher and the little boys bond slowly strengthens and a warm understanding developes between Sandhya and Snehamoy too. That’s when he starts suffering guilt pangs and decides to write a confession to his remote wife!
At Snehamoy’s untimely death, its amazing to read that the Japanese wife arrives at his village Shonai, with a shaven head & in whites like a devout Hindu widow!
This story, though unbelievable, does build my hope in love and commitment through its beautiful style of narration, that is the upside!
The Japanese Wife is a forthcoming Bollywood movied by Bengali film director Aparna Sen, starring Raima Sen, Rahul Bose & The Japanese actress Chigusa Takaku, slotted for a release in April 2010.
I feel the original Kunal Basu story has been tweaked a bit to bring it on the reel and to make it more believable.
Waiting to watch it and see which one turns out to be the better half, the one on paper or the one on screen?
reader's corner

Chatterbox said…
That was a fantastic review Vibhuti :)
I agree with you the idea of staying in a long distance for a decade definitely sounds unrealistic but the ending you suggested definitely brings to my mind that it would be a saga of emotions :)

Keep up the good work :D

Read about it in an Raima Sen interview.....would love to watch this movie.......

Preeti said…
interesting !! yea i agree quite unbelievable at today's time when people are not even looking for an excuse to cheat , its like a norm nowdays ..

Vibhuti Bhandarkar said…
Thankyou dear Chatterbox...:)
Your name and ur blog, both are interesting...Thanks for visiting mine!
The short story is disappointing also because theres not much of an exhibition of emotions too!
:(
..just an idea, well-written about, in my opinion!
Mar 25, 2010, 2:03:00 PM

Vibhuti Bhandarkar said…
No Hitesh, the movie hasnt been released yet, as far as I know! I read about it in the papers too and then got hold of the book with huge expectations...Then came the disappointment because th eplot and descriptions are so beautiful....but he's kept the emotions in a strict check!
Mar 25, 2010, 2:06:00 PM

Rumya said…
I've been reading a lot about the film on Twitter (Konkona SenSharma's Twitter Profile). But I had no idea it was a book too.

Sounds interesting and I've been wanting to do some reading too...so am going to try and pick this book up. Thanks for the review.

Vibhuti Bhandarkar said…
SO u r a Big Twitter & Movie buff I see! :D
Thanks for letting me know the exact dates of release..will find out about Pune!
It isn't a book..its just the first short story amongst many others in the book by Kunal Basu..
though the book has been given the same title! Hes a good writer..do try it!
Mar 25, 2010, 2:56:00 PM

Vatsa said…
Gosh, this sounds like a lovely story. I will have to get this book the next time I am at the bookstore, you have made it sound so interesting. I agree with you, the premise of the story might be a bit unrealistic, but then, thats what makes it romantic.
Mar 25, 2010, 9:16:00 PM

Vintage Obsession said…
I totally loved it as well :) though you have put together the feeling of the book nicely :)

Deepa said…
Hi Vibhuti. Visiting your blog after a while. I havent read the book and after reading your review, I think perhaps I'll give it a miss. Is it set in contemporary times or its like a pre independence saga? In this age of internet and sms, it would be difficult to believe a 'love letter story' or the shaved head etc!! But perhaps I may watch the film to know what Aparna Sen's interpretation is like. :)
Mar 31, 2010, 12:54:00 PM

Vatsa said…
Gosh, this sounds like a lovely story. I will have to get this book the next time I am at the bookstore, you have made it sound so interesting. I agree with you, the premise of the story might be a bit unrealistic, but then, thats what makes it romantic.
Nov 4, 2010, 11:33:00 AM

Manreet Sodhi Someshwar said…
I guess in today's day and age long-distance love sounds like such an anachronism but if it does happen it is rather romantic!
Nov 7, 2011, 1:00:00 PM

Manreet Sodhi Someshwar said…
Long-distance relationship in today's day and age does sound anachronistic but at the same time there is an allure to it - I have yet to read the book, thanks for the review :)
Nov 7, 2011, 1:01:00 PM

vibhutib said…
Hi Manreet,
Thanks for stopping by at my blog and reading the review..
I have a good news for you..I have progressed to becoming an author myself..Please do look up my book 'Not Totally Unbelievable'..
Cheers and Thanks once again
Nov 7, 2011, 1:18:00 PM

Shilp3005 said…
I know it dsnt sound real n practically impossible to have such a long distance relation, but hey this is supposed to be a fiction, not a documentary or report. I dint read the book, but saw the movie, and it filled my eyes with tears. Well written review though.
Jan 18, 2013, 4:03:00 PM