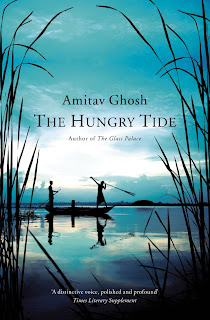 A Hutch Crossword Book Award winner of 2004, 'The Hungry Tide'  tells the tale of the settlers of Sundarbans. The book is neatly divided into 2 distinct parts- The Ebb: Bhata (Part I) & The Flood: Jowar (Part II). The parts are like the first and second half of a good movie, that would leave a feeling of lacking and incompleteness without each other.

The book rotates around two protagonists- Piyali Roy, the Marine Biologist from America of Bengali origins who has arrived in the Sundarbans to further her study on a specific species of cetaceans and Kanai (to be pronounced to rhyme with Hawaii) Dutt who is a Delhi based Businessman. He is also drawn in the same direction as Piya but only for personal reasons. In the first half of the book the two meet and part and meet once again while their stories are being related on parallel premises.

Between the sea and the plains of Bengal, on the easternmost coast of India, lies an immense archipelago of islands. One of these islands is Lusibari meaning Lusi's home, where Kanaii's aging aunt Nilima has lived for ages and has done great contributions to the betterment of the settler's life there. At her behest he travels to the village to collect a packet that his late uncle Nirmal has left for him. While Piya has travelled great distances in the hope of acquiring and collecting valuable information on a species of rare fresh water dolphins called the Orcaella Brevirostris, known to forage in the backwaters.
The author has done such an immense amount of research on the life in the Sundarbans and also on the methods of observation of cetacean life  that not one moment will the reader feel that the story is anything but the truth. Walking a thin line between fiction and reality, Amitav Ghosh is a truly gifted writer who knows how to keep the readers spinning the pages despite the simplicity of the storyline. There is no drama, no thriller turns in the story but it is definitely an intricate detailed sketch of the multifaceted life in the islands. The labyrinthine quality to the storytelling is what I enjoyed and the beauty of the plot was that it had a mythological leaning to it.

Amitav Ghosh has designed a lovable mythological goddess of the jungles called Bon Bibi and her valiant brother Shah Jongoli who fight Dokhin Rai, the demon of the jungles who attacks the unassuming settlers in the form of a Tiger. The pooja offered to the goddess is yet another interesting aspect since its been written in an interesting mix of Arabic and Bangla that sounds almost authentic! The way the story of the land flows and twists in the second half is extremely believable and at no point was I bored even though the narration maintained a steady pace. Another interesting character that played a pivotal role was Fokir, the local crab-catcher.

With a hint of a love story at the end in the otherwise serious structure of the tale, Amitav Ghosh has also attempted to spice up the life of the villagers. What impressed me was the way he has woven a conscientious subject as the conservation of Tigers, another endangered species of mammals- The Irrawaddy Dolphins and the Crocodiles of the Sundarbans.

'The Hungry Tide' is not your typical fiction novel but one that has deviated from stereotypical mainstream to emerge as one-of-a-kind read!
I would say if you are looking for a different reader's experience and love to learn more about the diverse Indian cultures, traditions and lands then this book is a MUST READ!

Karthik said…
Amitav Ghosh?? Nooooooooooooo!!!!!!
I read "The Calcutta Chromosome" a couple of months ago and boy, was I bored - to death?! Yes, indeed. The only thing I enjoyed was his language. Otherwise it was a hair pulling experience. :P :P
But your review of another AG's work has tempted me to pick it up. I'm confused. :D
Nevertheless, it was a very nice review. :)
Feb 19, 2010, 10:45:00 AM

Vibhuti Bhandarkar said…
Karthik,
it is a bit lengthy, highly descriptive and there's no adrenaline rush while reading at all...So I don't know whether its to your liking. I liked it because its research based and definitely increased my knowledge of different worlds other than mine!
Give the book a chance but dont accuse me of pushing you into it..:P
Feb 19, 2010, 11:35:00 AM

Vibhuti Bhandarkar said…
Thankyou Ankit.
I was into reading a lot of self-developmental book till last year but now have come back to fiction. Its relaxing at times to just laze around with a good book and a cup of coffee..:)
Feb 19, 2010, 1:20:00 PM

Lakshmi said…
I believe the legend of bon bibi in the sunderbans is authentic, not a figment of Amitav Gosh's imagination. He only incorporated it in his story :)
Mar 30, 2010, 1:41:00 AM

Mohitessar said…
Must be an enjoyable read Sea of Poppies by Amitav Ghosh. loved the way you wrote it. I find your review very genuine and orignal, this book is going in by "to read" list.
Mar 29, 2011, 10:45:00 PM