- July 14, 2010
Hong Zhung, son of Emperor Lao Zhung was a brave and talented young man. At the fag end of his teens, he was far more matured and knowledgable for his age. His ardent followers attributed that to the numerous voyages he'd made across the seas and shared many a meals with foreigners from all over the world. His intelligence shone bright in his eyes and his ready sense of humour. Besides being witty he was also a very sharp strategist. He planned each journey of his vessels such that time and money was best utilised. Thus he sourced and brought many wonderful treats back in return for silk and tea leaves from his own land.
Hong Zhung was a soul of the open and vast world. He could never remain confined within the palace premises wrapped up in the politics of the Imperial court. He chose to shun the company of scheming officials and the luxuries of the palace, being content with the earthly pleasures available to him on the oceanic escapades, instead.
Hong Zhung was an extremely talented musician too which mainly drew Wu Zhung to him.  Despite the disparity in their ages, Wu and Hong Zhung discovered many similarities in each other. Friendship blossomed between the two over the sharing of their likes, and dislikes, their hobbies and interests. The sharing soon became an obsessive topic of discussion consuming them completely. Their conversations were so full of mirth and energy that it sounded like the bubbling confluence of rivers. As days became weeks and weeks merged into months, while travelling from islands to shores, Wu and Hong Zhung's companionship grew into a relationship.Theirs was a happy and loving couple, enveloped in their common interest in dance and music and admiration of one another’s artistic talents.
One night they sat on the deck and composed a song together. She danced gracefully to every verse as he waxed lyrical. He would sing a note and she would pluck her LiuQuin to the rhythm. Thus were born some famous tunes that were hummed for generations later. Many nights the only sounds travelling with the breeze were the lapping of the waves, Hong Zhung and Wu's voices belting out one lilting song after another and the twang of the LiuQuin. One of the songs was inspired from a dream she had of beautiful fairies dancing between peonies.
As their journey neared an end Hong Zhung was petrified. he was so intensely in love with Wu Zhung and emotionally involved with her that it became very difficult for him to accept that she in fact belonged to the Emperor. He swore never to bed another lady again if it wasn't Wu herself. She was taken aback at the kind of commitment this young prince had promised her.
Soon they were back home and in the days that followed Wu Zhung lived in a trance like haze. She flitted about in 'The Great Within' like a dainty fairy herself, her feet almost dancing not walking. She had forgotten all her previous plans and could dream only of Hong Zhung's tender touch. His loving eyes peering deep into hers as if trying to delve into her soul. His words stirring the deepest emotions she had locked up inside her for ages. Hong Zhung had made her feel what she had never felt all her life. As if every sense in her petite body had suddenly been shaken out of slumber. When her fingers touched the window pane they drummed the tunes Hong Zhung had hummed. Even the thumping of her heart seemed to be repeating his name.
"I am in love.", Wu Zhung had shouted from the terrace of LuiFei's home and she had been overheard. Not only by YinHe and LuiFei but also by one other soul. While LuiFei and YinHe stayed mum on the subject and did not dare probe for the whole truth, news had travelled to The Emperor's ears.
" Exactly what I'd feared. You were the only one I trusted the most amongst all my lovely ladies, Wu. You couldn't do this to me. Not you!",exclaimed Lao banging his hand down on the side of his table. He was just about to write out an invitation to Wu Zhung asking her to come meet him and share her experiences of the foreign lands. He stopped short of writing, "I missed you!" and wrote instead, " Need to speak to you as soon as possible." 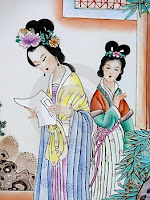 Hong Zhung was promptly dispatched in the wee hours of the next morning with a treasure fleet to Calicut from where they were to proceed on the tail end of the north-east monsoon into the Indan Ocean, cruising south-wards to make landings in Africa. The sudden need for such an expedition puzzled Hong Zhung who was oblivious to the idea that news of his love affair may have travelled.
Wu Zhung was also unaware that the most dreaded thing had happened. She continued to float on cloud 9. She yearned to be in Hong Zhung's company once again and began to hatch a plan for a secret meeting. When a letter from him arrived, bading her Good Bye!
" Farewell, my darling!", Wu Zhung wished he'd met her before leaving.
fiction The Great Without

Someone is Special said…
Wow ! Part 14 & 15 are awesome, I am loving it as it makes me glued and awaits for your updates.