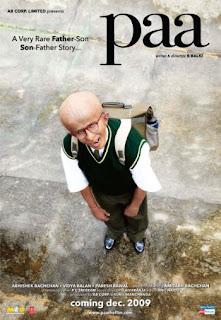 Introducing Amitabh Bachchan say the credits. Indeed writer & Director R.Balki meticulously plans every angle of his movie like the great Ad-man that he is! Paa is a very rare Father-Son Son-Father story says Balki weaving the same tongue-in-cheek wise cracks into his script like the previous success 'Chini Kum'. Its truly entertaining to see how he used humour to have all of us fall for the little Auro. No strain of the movie harping on the boy's illness and yet making it a gripping tale! Kudos...
Progeria is that rare genetic condition wherein aging is accelrated and manifests at a very early age. Those born with this condition typically live only upto 13 years of age.Full justice ha sbeen done to the character of Auro by none other than Bollywoods undeniable Badshah Amitabh Bachchan. No one must have imagined how age could have been used to the advantage while playing the role of a 10 year old! The role was so well-played to the hilt that one almost forgets that its Big AB there and not an overgrown kid.
The Make-up artists have definitely done a fabulous job transforming the well-known contours of Amitabh's face into the very realistic lookin swollen head of a progeric patient.
Auro is a very bright and intelligent boy well aware of this disorder who seems to laugh it off with his witty jokes.  Though hes different from the rest he has made quite a fan-following at school with his endearing nature! 'Bum' (Arundhati Naag is amazing.) & Maa  (Vidya Balan) have played the role of doting grandma and mother respectfully. . Though Auro may remind you of Benjamin Button this tale is far more believable.It  revolves around  the generally happy Auro &  his family living in a world parallel to that of the MP. Until they Meet!.
Auro has ignored the nagging feeling of missing a Pa in his life and has also accepted that his Ma never did the 'round, round!' indicating the Hindu Vedic marriage ritual. However once the MP & Auro have a budding friendship between them by destiny's own trick, the grandma can't resist letting the cat out of the bag. Gradually the revelation of his Pa's name by Vidya Balan has Auro pining to bring his Ma & Pa together again. For good!
The first half is a super introduction and the second half has a gripping, tragic tear-triggering end!
The movie is worth the watch for sure.
Magnificent performance by the cast and a narration that wraps you. The father-son bonding is where the movie peaks. However you do tend to wish at many points that film would focus more on Auro than the Slum Redevelopment episode by the youthful MP Amol Arte (Abhishek Bachchan). The dramatic end with Auro actually mouthing 'Paa' and dying a peaceful death leaves one teary-eyed and wishing there was more!
Also all Mas and Pas think! Don't underestimate the power of love and the intelligence of your kids...
Movie Review

Karthik said…
Never had the guts to go and watch this movie, for I feared emosional attyachar. :P
Your review tells a different tale. It might be a light movie after all. :-)
Very nice review, Vibhuti.
Jan 14, 2010, 4:29:00 PM

Vibhuti Bhandarkar said…
@Karthik..Dont waste anymore time..Intelligent minds will enjoy definitely..Its available on DVD too!
Glad my review has been of help.:)

Deepa said…
Good review Vibhuti. I liked Paa myself. The story was simple yet poignant. Apart from this what I liked about this movie that it wasn't 'Punjabised' (like your standard Aditya Chopra fare). It was set in Lucknow - a lovely city with superb people and oodles of culture. The female lead was more than just a pretty face. She was a doctor and a lady with guts and gumption to have a child out of wedlock. Not a perfect movie. But a nice movie that makes you feel nice and warm at the end.
Feb 6, 2010, 9:45:00 PM