- February 26, 2010
This post has been altered on 2nd March after a valuable feedback from another blogger.
At first we, Dr. Ajay Pradhan & I believed that this bird I'd spotted is the  The Red-necked Falcon or Red-headed Merlin (Falco chicquera). However, a kind reader and fellow-blogger Thomas, whose a veteran nature enthusiast, pointed out that we were mistaken.
This bird here is in fact the Shikra  (adult male) and not the Turumti! 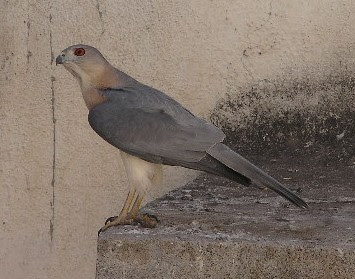 As of now I'm extremely thrilled to have spotted a bird of prey. And I have actually also been able to click a fantastic picture within its brief moment of perch.
WOW!! Isn't this a price catch of sorts?
" Just look at the details..the red eye..super Vibhuti!" were the words of praise from Ajay!
The Shikra or The Little Banded Goshawk (Accipiter badius) is a small bird of prey in the family Accipitridae, which also includes many other diurnal raptors like the eagle, buzzard and the harrier. This bird is a small raptor (26–30cm long), a widespread resident breeder in India and Sub-Saharan Africa.
The Shikra's hunting technique is similar to that of other small hawks. It mainly preys on lizards, dragonflys, small birds and mammals.The call is a bi-syllabled whistle titu.
The Shikra used to be a favourite raptor amongst the falconers in India, due to the ease with it could be trained and was frequently used to procure food for the more prized falcons. On the fist it was carried unhooded, and released with the belly resting on the palm and wings held around the base. 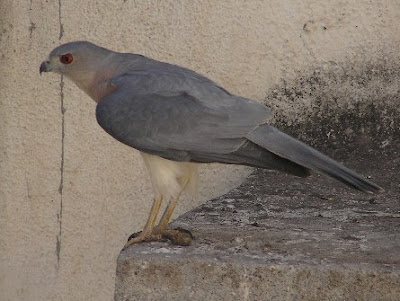 I just can't get over the blood red eyes that stared at me.
Hoping to see you again friend!!
birding Hobbies Nature Photography

Mahesh Aadhya Kalal said…
Ornithology is a much less recognised study/hobby/passion in India. Read about "Salim Ali" , the great ornithologist in india. It would definitely bring some unexplored areas of nature and birds.
Feb 28, 2010, 2:41:00 AM

Vibhuti Bhandarkar said…
@ Zabii & Mahesh- Yes, like Philately and coin collection, bird watching is also and uncommon hobby/passion which I still very actively pursue. Read Salim Ali since we had that small chapter in a school text book...:D
Feb 28, 2010, 8:39:00 AM

Vintage Obsession said…
thats such a talent to be able to identify!!
when no one has the time to give a minute to just look at these amazing cretures, its really nice to know people like u exsist as well:) cheers!:)
Mar 1, 2010, 12:18:00 PM

While from this angle it is not clear, Shikra have a distinct fine brownish-orange barring on its underparts.

Vibhuti Bhandarkar said…
@ SureIndran: Thanks. Glad you liked it!

@VO: Am in love with your passion too..Fashion!

@Thomas: Thanks a ton for doing me such a great favour. I have altered the post after your feedback. Am also conveying regards from Ajay for pointing out his mistake in identifying the bird!
Really grateful...:)
Mar 2, 2010, 9:28:00 AM

Unknown said…
Great picture, Vibhuti. Well done!
There is no doubt about this being a Shikra. But I don't think the Indian Shikra is called a Little Banded Goshawk. As far as I know, the African subspecies has that name.
Sadly, sighting birds of prey in Pune is getting rarer by the day. Gone are the days when you were not surprised to see a Shikra or a Kestrel on the tekdi or a Marsh Harrier on Pashan lake or Mula-Mutha sanctuary. Can you believe that a pair of Bonelli's Eagles nested every year near Pashan? Or that a Blackwinged Kite pair had its nest around what is today Harvest Club near Mhatre Bridge. Or that a Shaheen Falcon was once seen at, hold your breath, NAL STOP !!!
Jun 18, 2010, 2:51:00 AM

Vibhuti Bhandarkar said…
Whoa!
Pushkarajji am so thrilled that such a knowledgable birder like you is taking interest in my posts.
I have no guidance here on this at all. Am just hunting with my lens and a chance spotting makes my day. Am really raw at birding but am enjoying it thoroughly and ur comment here has fuelled it further..These birds you mention, werent aware of them at all..
THanks a lot for all this interesting trivia!! :D
Jun 18, 2010, 9:49:00 AM

Vibhuti B said…
Whoa!
Pushkarajji am so thrilled that such a knowledgable birder like you is taking interest in my posts.
I have no guidance here on this at all. Am just hunting with my lens and a chance spotting makes my day. Am really raw at birding but am enjoying it thoroughly and ur comment here has fuelled it further..These birds you mention, werent aware of them at all..
THanks a lot for all this interesting trivia!! :D
Nov 4, 2010, 11:33:00 AM