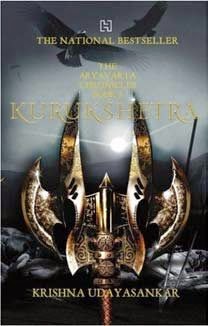 “For a while, Criticism travels side by side with the Work, then Criticism vanishes and it's the Readers who keep pace."
-― Roberto Bolaño, The Savage Detectives

That's precisely what happened with me when I picked up this book with the other end in mind. I had planned to review it and being a die-hard historical fiction fan had already made up my mind to read it like a good critic would. What fueled my criticism were the numerous typographical errors. So many missing letters in words which changed the meaning and structure of the sentence.for eg. 'Identity' became 'identify' on page. 31. This book sorely required some more proof-reading. There was also one sentence on Page 360- "And the toxin? Where it is?". This left me in splits in the middle of reading a gravely serious scene. Especially in the last few pages, the frequency of errors increased as the end of the book approached. It seemed the author had furiously typed away and the proof-reader lost patience by the end of the book.

The book cover reads, 'The Epic as it was never told before'. This made it all the more enticing and exciting to pick this book up. Not having read the previous two books of the Aryavarta Chronicles, I was absolutely clueless to what I should expect from the story telling. It could be an advantage for it would mean getting to read the juiciest part - the end but it also meant struggling to imagine the build up from the first two books. Nevertheless, I quite liked the author's style of story telling. The English is impeccable. She clearly has a knack for writing long sentences with deeper meanings and an absolutely brilliant vocabulary. However at the very beginning of the book I felt like it was becoming a tedious task to read this book. I still kept ploughing through the pages since the Mahabharata and the story of the war at Kurukshetra has been my long time favourite epic about ancient India.

However I soon realised that from page 161 onward I stopped being critical about the prose and was taken in by the book. I was engrossed in reading and keeping pace with the fast progressing storyline. I finally stopped falling off the wagon as the narration became more and more interesting. Like the back blurb reads,I must agree that the author did show great imagination in narrating the gory war episode that ensued over the period of 18 and odd days. One may imagine a war story would only have a cold and chilling effect but in this book there was passion, there was rage, there was love, lust and a whole lot of conspiracy, politics and sly strategies too. I loved it how she has woven a 'Mills & Boon'-esque story of the love birds Uttara and Abhimanyu into the very fabric of the heated battlefield. That made for a welcome break from the constant long drawn and brain-whacking discussion between all the prime characters.

My favourite part of the Kurukshetra war was the extensive description of the various battle formations that was written very intelligently. However my grouse is the way the character of Govinda Shauri developed in the plot. In my opinion the character of Govinda Shauri has been painted more like a 'Narada' in the first half of the book than like 'Narayana'. While by the end of the book Govinda is jerked into emerging as a God. The transition didn't appear smooth or convincing to me. He also teetered on the brink of sounding so vain and confused about what he exactly wanted from it all? Why was he triggering the war after all? And suddenly when he had to convince Partha to wake up and smell the stench of the Kuru fields, to pick up his Gandiva and stop being silly, Govinda Shauri almost abruptly begins expounding such intelligent philosophy. Also his God-like sermon is being lapped up by an over-eager and already very convinced Partha. The same Partha who was doubting Govinda's credibility a minute ago, keeps oscillating between blind belief and distrust. Otherwise I also missed the mention of the very famous gem that Aswattama was born with, on his forehead, probably kept out on purpose to portray him as a normal human being unlike a demi-god. Though the character has been dealt with very nicely, the story of how his father Dron was tricked into believing his son was dead was also only briefly touched upon.

Also I have a personal penchant for well-selected names of characters in a story. Krishna Udaysankar may have tried to give the story a new flavour by spelling the names of the various characters of the Mahabharata differently but I would have preferred it if they didn't sound like they belonged with Harry Potter. Why make him 'Dhrstyadymn' that will be read as Dhr-stya-dim by dropping the vowels when most of the other names were written as they have always been spelt. Same goes for 'Pradymna'. When its 'Kripa' and 'Govinda' then why call him 'Dron' and not Drona? She has also dropped the 'h' from many names that may go unnoticed by wont of habit in reading the names as they are usually pronounced in Hindu historical fiction.

The explanation and introduction of the cast of characters and the family tree given at the very beginning of the book helped me understand the concept of the 'Firewrights' and the 'Firstborn'.

All in all, the author has written a book with all her sincerity, integrity and skill. And I salute her for finishing the trilogy so beautifully on one of the most complex epics from Indian history. The kind of research and study that has gone into this endeavour is exemplary and worth a roaring applause.

I thank BlogAdda for sending me such a wonderful book.

This review is a part of the biggest Book Review Program for Indian Bloggers. Participate now to get free books!