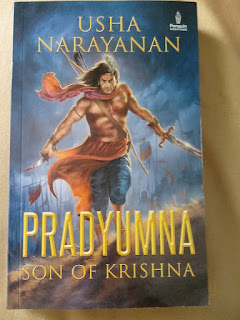 Book Title: Pradyumna- Son of Krishna
Author: Usha Narayanan
Publisher: Penguin metro reads
My Rating: *****
About the Author:
Usha Narayanan is a gold-medallist with a Master’s degree in English Literature. After carving out an illustrious career in writing for teh Advertising Industry, she made a successful debut as an author with the novel- ‘The Madras Mangler’, a suspense thriller.

Before I begin to tell you more about this- one of my latest acquisitions and favourite reads, I must warn you that I am a great fan of mythology. And to add to that I'm already sold on the book cover- illustrated by Jay Thakur. A large part of my childhood memories include reading book after book and comic after comic on Indian mythological stories. These books were often full of colourful illustrations that aided my imagination but here's a book who's cover singularly provided more than enough fodder for my creative brain to conjure up images as Usha Narayanan unleashed her flawless storytelling in impeccable English.

And what a subject to have hit upon! I applaud Usha Narayanan for waving her magic wand and turning the comparatively lesser popular mythological stories based on Krishna's children into this gripping saga of the rise of a swashbuckling hero. I imagine it must have been quite a task at hand to weave a long tale from short anecdotes and slivers of stories available on the characters that flourish in this book. I'm sure intense research and painstaking attention to detail went into each page. And will it sound redundant if I said that its turned out into a brilliant book?

Rukmini and Jambvati, the wives of Lord Krishna were blessed with one son each, and each child exhibited the precise characteristics that their mothers had prayed for. Rukmini's son was named Pradyumna- the mighty one, while Jambavati's son was named Samba-attended by Amba, or mother. However the Devarishi, Narada portents a dark future. One of the newborns would ravage the world and erase the name of Krishna from the face of the earth. Which of the two sons would it be? As the mystery unfolds, Usha Narayanan has successfully created layers to a simple story line, touching upon the concept of rebirth.
Kamadeva- the god of love and Rati- his consort, are reborn in the dark nether land of the Asuras as Vama and Queen Mayavati- the son and wife of the vicious emperor Kaalasura respectively. While Kaalasura learns of the dark secret about his adopted son and disowns him, Vama is also made aware of the truth. Mayavati reveals that the feeble Vama, puny before the great Kaalasura, is not her son. He is none other than Pradyumna, son of Rukmini and Krishna- the Lord of Dwarka heir to a chieftain and the hope of a great clan. How the meek weakling Vama transformed into the fearless and invincible Pradyumna, how he transcended into a demon slayer and the saviour of the world when all the odds were stacked against him is an enthralling story.
There's a whole lot of drama, nail-biting action and dollops of ancient Indian trivia woven into the fabric of the saga.

Shiva listened as Brahma continued to speak, " I once had a dream in which I saw you with a blue skin, carrying the conch, the chakra and the mace, and riding on Garuda, " said Brahma, "I then saw Vishnu on your bull, wearing a tiger skin and wielding your trishul. What does the dream mean, Ishwara?"
Shiva replied in a calm voice, returning to his usual equanimity, " Vishnu and I are the same, merely taking on different forms and colours, like water moulding itself in a vessel."

For me this passage has reinstated my faith in the philosophy that our religion is not about propitiating 'many' Gods but about reaching the single superpower- God by many different pathways. Hinduism is a pluralist religion, well thought out but greatly misunderstood. And these mythological stories have made attempts at explaining it. Before I begin to sound like I am a staunch proponent of the religion I wish to clarify that I am only trying to lead you to see what I found in this book. A deeper thread of thought, that call 'HIM' by whatever name, understand HIM in whichever form, GOD is great!

And so is this book, Pradyumna- Son of Krishna who rose against several challenges to save the world from the Asuras.  Every book will be perceived in a different light by each individual reader. I came away with a lot from this simplistic yet fantastical story.

The way Usha Narayanan has brought the curtains down on the tale with Gandhari's monologue that criticises Krishna and his principles upholding the dharma is quite heart wrenching.

All in all, a MUST READ for all mythology fans.

Someone is Special said…
This book is getting good reviews from book reviewers, which is very good to know. I have this book in my reading list. Once I reach India, I will surely read and review it.

Usha Narayanan said…
What a lovely review! Makes it so rewarding to slog long hours to add that extra layer and that extra colour. Am very happy that there are readers and reviewers of your calibre :) A big thank you!
Dec 9, 2015, 7:59:00 PM