Kafka on the Shore- Book Review 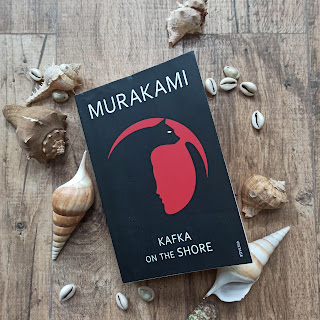 Book Title: Kafka on the Shore

About the Author: Haruki Murakami is a popular contemporary Japanese writer, who studied drama at Waseda University in Tokyo.  His writing is heavily influenced by Western culture, particularly Western music and literature. His books have been translated into more than 50 languages and many international honours and awards have also been conferred upon him.

I'd read that Haruki Murakami's books are easily accessible yet profoundly complex. After reading 'Kafka on the Shore', I understand what that exactly means.

As a professionally trained commercial artist, I've learnt about 'Surrealism' as an art but I've never seen it applied to writing, in this fantastic a manner. Haruki Murakami is a magician as far as this book goes!

The book progresses simultaneously in two parts- All the odd number chapters is in the first person narration by a 15 year old boy called Kafka Tamura who runs away from home to escape the dark fate that his father (whom he hates) has predicted about him. All the even numbered chapters tell us the story of an odd little old man called Nakata who is not so bright, but can talk to cats. The storytelling is slow paced at the beginning but undeniably gripping, and intriguing.

I doff my proverbial hat for the way this author can build all of his characters, besides the protagonists in focus. Around 150 pages into the book, the story takes the most unexpected of turns and from thereon its a roller coaster ride with the most mind-boggling characters, that keep appearing one after the other; Johnnie Walker, an infamous cat-killer in whose dictionary, hesitate is one word you wont find; Oshima, a hemophiliac of undetermined sex who runs a private library, and owns a secluded shack at the edge of the labyrinthine forests in the mountains; ghost-like Colonel Sanders dressed in whites, neither god-nor a Buddha, who plays a key-role for Nakata's mission. Even those that make short appearances, like Mimi the Siamese cat, the boy named Crow, Hoshino in the Chunichi dragons cap, all are so interesting, entertaining and memorable.

The reader will definitely be awed by the way the stories that are seemingly disconnected at the start, running parallel like two trains collide into a magnificently philosophical, meta-physical, explosive and stunning end. It all ties-in, in the most unimaginable way!

I have deducted one star most reluctantly because of a very personal opinion. The extremely descriptive cat-torture and incest scenes that I couldn't get out of my head, felt very disturbing to me, and it seemed like the author bordered on promoting the immorality. Maybe, the intention and voice was lost in translation, or I've missed the point totally, but those are the only points in the story which I wished I could omit.

Overall, I am in a complete Murakami hangover! And, this book definitely makes me want to read more from this author because I want to dip into his vast knowledge of literature, philosophy and music.

My verdict- Kafka on the shore is not meant for all readers, but if you enjoy surrealism then this is a MUST READ!

Submitting this Book Review as the

for the category: A book originally published in the 2000s