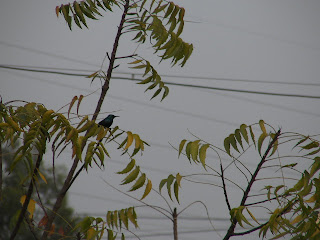 The Purple Sunbird, Cinnyris asiaticus, is a very small old world passerine bird that feeds mainly on nectar. Less than 10cm long the most prominent feature of this bird is its down-curve bill with brush-tipped tubular tongue.The species is distributed widely from the Persian Gulf through South Asia and into Southeast Asia. They are resident birds in most parts of India distributed over the east of the desert region and south of the Himalayas. 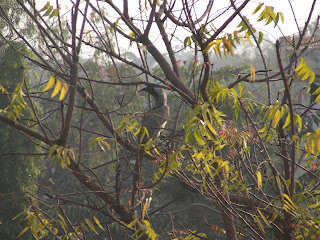 The Indian Grey Hornbill (Ocyceros birostris) is a common hornbill found on the Indian subcontinent, one of the few hornbill species found within urban areas in many cities where they are able to make use of large avenue trees. About 24 inches long, the call is a squealing call. Mostly spotted in pairs, their flight is heavy and gliding. 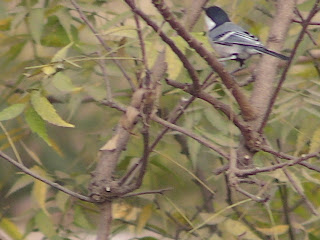 The Great Tit (Parus major) a passerine bird of the Tit family, is a widespread species of temperate Europe & Asia. The great Tit does not usually migrate.14cms in size this bird has a variety of calls most familiar being 'tichrrr'.Great Tits are cavity nesters, breeding in a hole that is usually inside a tree and are mainly insectivores.The Great Tit is a popular garden bird due to its acrobatic performances when feeding on nuts or seed.
This information has again been collected from My Ornithology guru Dr.Ajay Pradhan & Wikipedia.  Thanks a ton for the prompt and correct birding observations...
birding Hobbies Nature Photography

Karthik said…
ROFL on the third bird. Ah, what a name! The Great Tit from the Tit family! "Great tits are cavity nesters..." oooohahahahahah... :D :D
You've given me a lot of inspiration to write a post like this. :P
Hehehe.. Sorry. Please don't mind. I just couldn't stop laughing my guts out when I read it. :D

All right, jokes apart, this is really interesting. After a small lesson in School on the father of Indian ornithology, Dr. Salim Ali, I'd never cared for (real) ornithology. Your pictures and posts are really captivating and informative. Keep 'em coming. :)
Jan 30, 2010, 10:51:00 AM

Anonymous said…
The Grey Hornbill!! I have never sighted one here1 Looks beautiful!!

indianhomemaker said…
The Grey Hornbill!! I have never sighted one here1 Looks beautiful!!