Only these 2 can give me precise info about the birds I’ve recently spotted through my camera lens, Dr. Ajay Pradhan & Wikipedia.  And this is what I’ve learnt the second time around… 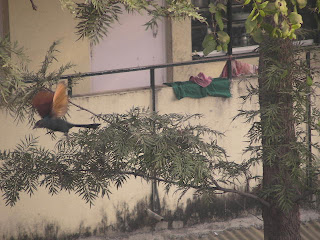 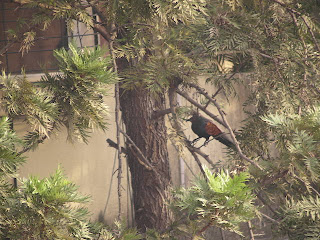 The Greater Coucal or the Crow Pheasant (Centropus sinensis) is a non-parasitic member of the cuckoo order,  the Cuculiformes. It is a widespread resident in .
The Coucal or the Crow Pheasant is colloquially referred to as the Bharadwaj bird or Kumbhar kaola in Marathi.  There are mainly too varieties- The Greater & the Lesser, informs Dr. Ajay  and what I’ve clicked here is the Greater Coucal. It is considered lucky to have spotted one!
With a purplish black body and rust coloured wings it is a large bird at 48 cm. The play of sunlight on its wings when in flight makes it appear golden! An extremely handsome bird it is. 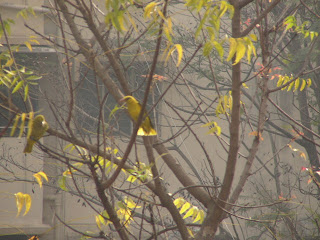 This pair is the Eurasian Golden Oriole (Oriolus Oriolus). As the name clearly suggests, these birds are found in Europe and except for the northern regions. Mostly flying in pairs, the female of the couple (seen to your left) is recognized by the greenish-yellow coloration on the chest. The male has black coloration under the wings, between the eyes and on the yellow bill.
These migratory birds return to by March.
The call is a screech like a  jay, but the song is a beautiful fluting weela-wee-ooo or or-iii-ole, unmistakable once heard. 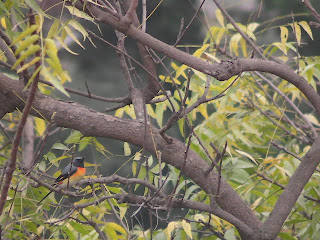 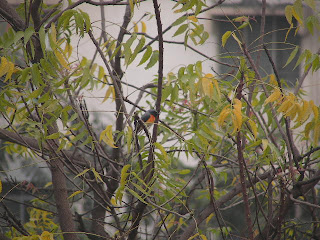 The Small Minivet, Pericrocotus cinnamomeus is found in tropical southern . The Small Minivet is 16 cm long with a strong dark beak and long wings. The Small Minivet feeds on insects, forms small flocks and its call is a high, thin swee swee swee.
Quite a handsome bird this little male is with its chest fading from a bright red down to yellow and white.
birding Hobbies Nature Photography

Sunny said…
Good ones ... u get nice birds around your place yaar ... Why dont u plan on an SLR? You would really get wonderful pics.

Vibhuti Bhandarkar said…
By the time you reach here they may all have flown off! :P
Yes, have already given my application for an SLR with my hubby's accounts deptmt. LOL
The next season you may find better pix rolled out..Till then plz make do with these!
:(
Jan 18, 2010, 6:01:00 PM

Sunny said…
Oh, I thought we'll have a coffee ... lol ... and honestly I was planning for a trip to pune ... would be great to meet a fellow blogger

Vibhuti Bhandarkar said…
Hi Karthik,
glad you like the post..
I cant comment on ur birding talents!
:P
Yes Ornithology is very interesting otherwise!
Jan 19, 2010, 9:50:00 AM

Unknown said…
hey your bird photography is going great! the crow pheasants have got a distinct personality. they are very stealthy, and go around raiding nests :) you might have enjoyed watching the orioles, they appear so beautiful!

Vibhuti Bhandarkar said…
Hey Roxy thanks!!
Yes, I spotted a lone minivet and havent spotted it again...:(
Can you guide me what cam I should pick up for such photography? Any special zoom lens and filter to suggest?
Im planning to invest in a good cam seriously!
Jan 21, 2010, 1:42:00 PM

Anonymous said…
Lovely pictures!! And interesting information ... Many of these less common birds are difficult to spot and still more difficult to photograph, because they are so beautifully camouflaged and they are constantly moving! And that's what makes these pictures even more precious.
Apr 5, 2010, 11:03:00 AM

Vibhuti Bhandarkar said…
HI Indian Homemaker:
Am so happy to see you are enjoying my newly found passion too..

Unknown said…
The Golden Oriole has a lovely Marathi name - HaLdya. (Note the capital L).
The Golden Oriole is beautiful, but hopefully you will get to see a Blacknaped Oriole some day. The golden fellow pales in comparison!
Jun 20, 2010, 11:05:00 PM