I was suggested by my feature editor to do a story on migratory birds in Pune this winter. Being completely ignorant about our avian friends I owned up and almost immediately declined. The story was taken up by a more knowledgeable pen later but I was left thinking!
How could I have missed out? I came home to peek out my terrace only to be even more bewildered by the blind eye Id turned towards the beauty around. The garden facing my flat, rich in flora & foliage was also being visited by a whole lot of interesting feathered friends.
My friend, the ever-obliging Dr. Ajay Pradhan who’s an avid bird-watcher also came to my rescue and helped me recognize the birds by their names. He started updating me on the basics of bird-watching, “ Just watch them patiently and carefully and you’ll see there’s so much to learn he says!”
So this is what I saw …. 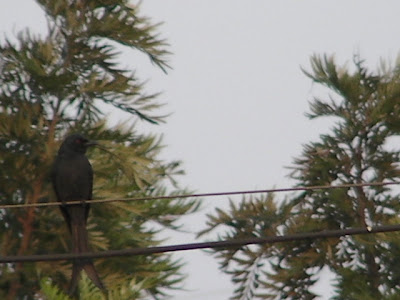 The adult Ashy Drongo (Corvidae Dicrurini)  breeds in central and also along the . “Next time u see this bird with a fork tail like a fish, watch for the color of its eye” instructs Ajay. And it’s true. This stiffly perched bird has a dark ashen grey slender body with deep red beady eyes and the tail is distinctively long and deeply forked approx. 29cms in length.
In winter, the species is particularly fond of hill forests. Found singly, in pairs or small groups, during migration they fly in small flocks. The breeding season is May to June with a clutch of three or four eggs laid in a loose cup nest in a tree.
The calls are a little more nasal and twangy, described as drangh gip or gip-gip-drangh. They can imitate the calls of other birds.
It is mainly insectivorous but sometimes gleans from tree trunks. 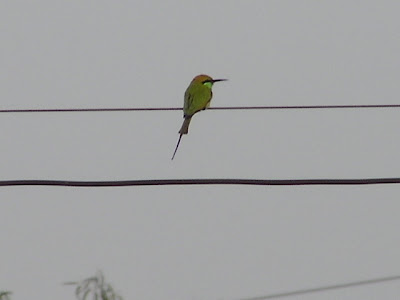 The Little Green bee-eater (Merops orientalis) is a widespread resident and summer visitor in .  Ajay raises my interest by informing, “See it catch flies/bees in mid-air &listen to its call. The calls is a nasal trill tree-tree-tree-tree, usually given in flight”
This little (approx. 17 cms) passerine bird is mostly seen in the plains and Migration is limited to seasonal movements depending on rainfall patterns. 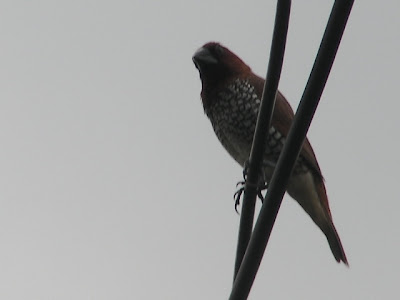 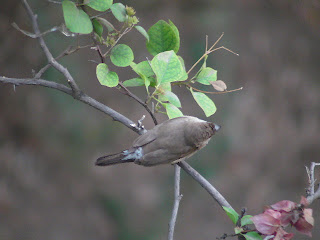 The Indian Silverbill ( White throated Munia) Lonchura malabarica is a resident breeding bird in .
10–12cm  in length , it’s a small gregarious bird which feeds mainly on seeds, usually in relatively open habitats, preferring to feed on the ground or on reeds and grasses. Several species have been noted to feed on algae such as Spirogyra.
The nest is a large domed grass structure in a tree or under the leaves of a house into which 4–10 white eggs are laid. 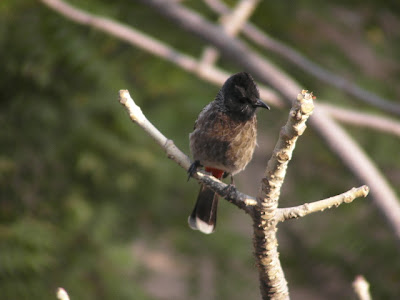 The Red-vented Bulbul (Pycnonotus cafer) is a member of the bulbul family and a resident breeder in tropical southern Asia and .
This is a bird of dry scrub, open forest, plains and cultivated lands, which feeds mainly on fruits, petals of flowers, nectar, insects and occasionally geckos.
The eggs are pale-pinkish with spots of darker red more dense at the broad end.They are capable of having multiple clutches in a year. Nests are small flat cups made of small twigs but sometimes making use of metal wires
Their vocalizations are usually stereotyped and they call throughout the year. However a number of distinct call types have been identified including roosting, begging, greeting, flight and two kinds of alarm calls. 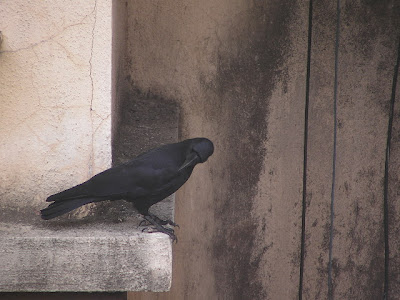 The Jungle Crow (Corvus macrorhynchos), is a very widespread Asian species of the Crow. They are very adaptable and are able to survive on a wide range of food sources making them capable of colonizing new areas due to which they are often considered a nuisance, especially on islands. They have a large bill and due to this they are also sometimes called Large-billed Crow or Thick-billed Crow.
"The prussian bluish balck sheen that you have correctly observed is known as 'Iridescence'" enumerated Dr. Ajay. 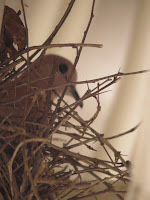 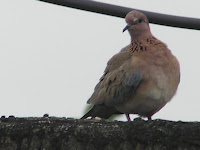 The Spotted Dove (Streptopelia chinensis), also known as the Spotted Turtle Dove, is a pigeon which is a resident breeding bird.
This species builds a stick nest in a tree and lays two white, glossy eggs
The call is a low and gentle coo-coo-croo, with the emphasis on last note. The call occasionally is "coo-coo krrroo, krook!" 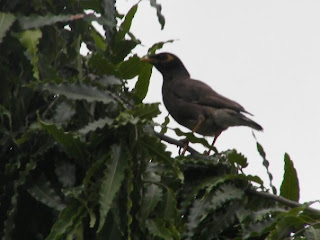 The Common Myna or Indian Myna (Acridotheres tristis) also sometimes spelled Mynah, is a member of the starling family. It is a species of bird native to Asia. An omnivorous open woodland bird with a strong territorial instinct, the Myna has adapted extremely well to urban environments.
Thanks to Google, Wikipedia and the very experienced eye of Dr. Ajay, I am no longer an ignoramus fool as far as birds are concerned!
Promise to get better..:)
birding Hobbies Nature Photography

Sunny said…
Again a very good writeup. I didn't know what did I capture till I saw our post ... LOL ... how ignorant of me, I would really try and find the names of the birds I capture. For starters I think I've captured The Spotted Dove and The Little Green Bee-eater. Thanks a ton Vibhuti.
Jan 9, 2010, 4:38:00 PM

Vibhuti Bhandarkar said…
Aww thanks to you..Its purely my pleasure if my writing is of interest and help to great minds like urs!
:)
Waiting to see ur avian visitors..
Jan 9, 2010, 11:53:00 PM

Unknown said…
Hey Vibhuthi, Well I m not a "Birds-Buddy" and as a matter of fact, probably I would be the last person on earth who would be forced to take his attention to the birds but guess what your post has given some bright future to this ever bird-ignorant being i.e. me :). Good research, good observations and Dr.Ajay is a great bird watcher. Thanks for sharing!!

Unknown said…
vibuthi, it is delighting to see you get much deep into bird watching. please keep it up. drongos are one of my favorites. have you heard drongos crying like a cat?! some drongos do that. it is so wonderful to hear. they are great imitators, and they can return your whistles and calls too. cheers and happy birding.

Vibhuti Bhandarkar said…
Hi Roxy I did miss your comments but its good you were offline for sweet reasons....
I have a long way still to go in bird watching but Im slowly picking up from friends...
This is a new found hobby in fact...
Will try to come up with more interesting stuff...
Thanks again...
:)
Jan 21, 2010, 1:45:00 PM