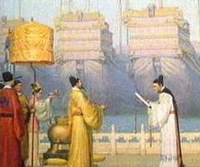 Over the past decade, under the reign of The Emperor Lao Zhung exploration of the different continents of the world flourished. The Chinese armada sailed gallantly across the Yellow Sea undertaking a journey south. The helmsman kept the Pole Star in sight and steered the ship on course. Accurate methods of navigation were soon developed. Precise sailing instructions were provided on manuals made from long thin strips of paper for each regular voyage undertaken. The Chinese marine engineers had built ships with robust frames where each section was contained by water-tight bulk-heads and bolted together with brass pins. Three layers of hardwood were nailed to a teak frame and the planks were caulked  with coir, sealed with a mixture of boiled tung oil and lime. Especially Lao Zhung's treasure fleets were carefully built using this waterproof lacquer.
Lao Zhung's dreams of charting the whole world was about to materialise.
Their fleets were mostly organised under the keen management of Hong Zhung,Emperor Lao Zhung's 4th son  from the first Empress. The captains and admirals of the ships were the eunuchs while the crew consisted of men from the lowest rungs of society. Hong Zhung ran his fleets like the British but with more respect for his men. They were all provided with long white robes as uniforms. Food and wine flowed like water on the ships and all the 150 men were well-cared for.
The ships brought back from their journeys, soya beans, wheat, millet and staple foods that the Chinese had never known before. The news of the success of Hong Zhung's trade affairs travelled far and wide and even found mention in Ibn Battuta's chronicles. The Moroccan traveller wrote that the trade of the whole world between the Malabar coast of India and China was majestically carried out in the most robust Chinese ships he'd ever seen.
Hong Zhung was about to return from one such successful voyage on the evening of the Chinese New Year. The scale of the celebrations had thus doubled.However the pompous celebrations in the palace failed to interest Wu Zhung. She only awaited her new found love who was to return from his expedition.
History was about to repeat itself and YinHe could see it.
He confided in LuiFei who was the only other person who could drive sense into Wu Zhung.
Wu Zhung refused to listen.
She feared the murmur in the corridors of 'the Great Within' were about her but that couldn't change her heart. She yearned for freedom too. She wished to sail the Yellow Seas too. 'The Great Within' pampered her but had also fettered th edaughter of the open lands at the same time.
Wu Zhung had paid a price for the luxury she enjoyed and the wealth her mother had been bestowed with.
Wu Zhung had spent her youth in confinement. She had sold her body. Now she planned to reclaim her soul.
Wu Zhung yearned for the simple happinesses of 'The Great Without'. She wished to washe her face once again in the tinkling, crystal clear waters of the rivers flowing down from the Cloud Mountains.Wu Zhung had recently seen 'The Great Without' in new light, in the company of a better person. And everything looked more beautiful now. Wu Zhung's heart longed to hold his hands once again, to intertwine her own fingers in his. Wu Zhunug wanted to to lay her head on  Hong Zhung's chest and hear his heart beat to the rhythm of her own.
Wu Zhung had tasted freedom and had found her true love!
fiction The Great Without