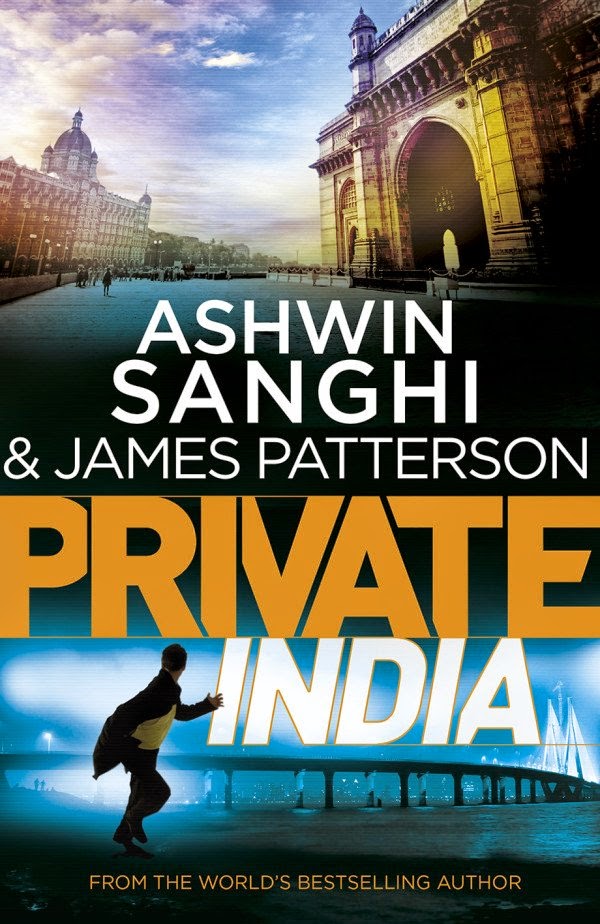 Ashwin Sanghi- one author of today's times whose work I really admire. Became a greater fan of his after Chanakya's Chant. All his books have been based in history and enumerate theological and mythological topics. PRIVATE INDIA -this book belongs to such a different genre visited by the author which also happens to be my favourite, that's how I got very intrigued. Also the idea of a collaboration between two famous writers who have very distinctive styles of writing was unique to me. James Patterson- heard a lot of good about his books but never picked up any of his works, so my mind was like that empty cup!

Having picked up the book and read through a few pages, I'd immediately shared at my Facebook Page.." Short chapters. Extremely easy comprehension. No complex story telling but prose that triggers great visualization. Suspense and drama, a perfect murder mystery...Remembering my Poirot-crazy days while I turn pages with Wagh and his cane...Super happy that I picked the book up".

Even after reading the book to its last page now, my first impression about the book remains the same.

Succinct writing that evokes emotions, fairly good use of great words and a style of narration that keeps the tempo of the story built up right till the end. Especially since the serial killer is on the prowl taking down one prey after another in quick succession, it was most essential that the reader remained on the edge of his seat,  turning the pages as quickly as the days went by in the story.

I must say that Ashwin Sanghi has let the characters in the story develop gradually but so very beautifully. Be it the protagonist Santosh Wagh who is investigating the crime scenes as a PRIVATE sleuth or the underworld goon Munna, I liked the descriptive nature of the story-telling that led the mind into making mental images of the characters, their lifestyle, their personality, their psychology too. Santosh Waghs struggle with his bottle of Whisky to douse the pain stemming from the loss of loved ones, made him so real. I could also feel it, when Mubeen wanted to get the hell out of Dr. Zafar's ghoulish morgue and I could actually feel the chill and stench in the morgue. The most profound scene that has stuck in my mind is the one that was narrated nearing the climax, at the Parsi's Tower of Silence. So morbid, so gripping!
I have grown up reading Agatha Christie's Poirot and Sidney Sheldon's series of books. Not to mention the innumerable Nancy Drew and Hardy Boys books read as a younger mind. I cannot deny I was beginning to think how different could this book be, when there were a string of seemingly unconnected deaths in Mumbai, that Nisha Gandhe, Mubeen and Hari Padhi were investigating alongside Santosh Wagh? Given that I'm a confessed Cinophile, taking off on movie marathons, watching foreign murder mysteries, thrillers, Hitchcocks and even the gruesome true-some, I wasn't expecting that this book would draw me in the way it did. How? Ashwin Sanghi did it, by giving that unexpected dash of spice to the story by adding a pinch of Indian Mythology to it all!
The plot as it began to unravel really surprised me. And the involvement of a Nimboo Baba in the scene kept me hooked. Also the parallel fear of a terrorist attack besides the hunt for this serial killer made for quite a multilayered plot.
However what went amiss for me was a bit more about the expression of motive in the murderer. When the author was giving me a peek into the mind of the serial killer, I wanted to begin hating him for the probable filth on his mind. That part din't pan out as powerful as the potential it carried to be. Felt as if some pages had been edited out or something, in a hurry to wrap up the case.

Or probably it was just me, not wanting the book to end. :)