Among The Stars: Book Review 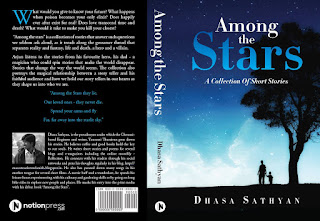 Book Title: Among the Stars
Author: Dhasa Sathyan
Publisher: Notion Press
My Rating: ***
About the Author: Dhasa Sathyan is the pen name of a Chennai based Engineer called Yamunai Thuraivan. He has also written many songs in his mother tongue for several short films. He debuts as an author with this collection of short stories.


The preface to the collection of short stories carries the following words that spoke much about how much the writer knows his reader's mind.
Go ahead
Do not walk – Stroll
Do not watch – Gaze
Do not travel – Wander
Do not read – Explore
- Dhasa Sathyan

He welcomes his readers to explore his penning rather than just read through. That's just what I decided to do and enjoyed!

The short stories in this collection are so varied in genre that they are most rightly described by the author himself as being 'as random as a jar of pebbles collected by a kid'. They are also as enthralling too. Among The Stars repeatedly reminded me of how much I enjoyed my mother's story telling when I was a child much like the protagonist of the book- Arjun. The short stories are all tales being narrated by his loving father as they lie under a starry night, on the terrace of their house. Only difference between me and Arjun is that I sat with my mother on our ground floor house doorstep, but I clearly remember this thought running through my head too.

"I stayed silent,staring up at the cloudless night, stars twinkling like a million diamonds and rubies that the Gods were trying to lure us with, taunting, mocking us."

I could completely relate to the whole idea of a child enjoying the storytelling by his parent.

In my opinion the author couldn't have devised a more intelligent idea of connecting these absolutely random short stories together but by stringing them up as tales told by Arjun's father to his son.

“Yes. They are stories in the sky. Some shine bright. Some shine so subtle that you don’t know
that they exist, unless you peer at them long enough. Stories, long or short, bright or dark, hold
their own magic. Some stars form constellations, strung together beautifully like the Orion and some
are random yet beautiful on their own, just like stories….”

Ranging from Contemporary to Horror, Romance, Short-Stories, Psychosis, Sci-Fi you name it and the author has explored the genre. Though it does seem implausible that under a beautiful starlit sky,a father would want to spook his own son by telling him tales of normal people turning into zombies that go 'Yeaaarrrrgh', but who knows? My own mother used to share with me some true stories of paranormal life- experiences, more than many times. And those remain the best memories of time spent in her company.

Recently at writer's and reader's forums there have been debates on the declining quality of Indian literature blaming Indie authors for using pedestrian English. Though I detest the trend too, I have always believed there are exceptions to every case. Dhasa Sathyan definitely shows promise in his choice of good words and his eye for detailing.

Though Notion Press may not have done a good job with the editing, what with many typographical errors creeping into the stories at numerous spots, the book cover is a scoring point. The cool colour scheme and the silhouettes set against a starry night sky is just perfect for a book of stories meant for young adults.

What would you give to know your future? What happens when poison becomes your only elixir? Does happily ever after exist for real? Does love transcend time and death? What would it take to make you kill your closest?

The short stories may not exactly answer these questions but have gone about exploring some great philosophical thoughts. The storyteller often gives his protagonist's name as 'Sanjay' saving the reader the pain of trying to remember names as we surf from one story into another. In one particular story there's an intriguing fork, I won't call it a twist for reasons you will find out when you read. There's a story within the story as Sanjay starts to tell a 'GHOST" story to a stranger he meets along a lonely road when his bicycle breaks down.

I am not such a great fan of the usage of the First Person voice especially while storytelling. In my opinion the stories would have made a greater impact if they were written form the protagonist's POV or even an omnipresent narrator's voice would have done just fine.

The book concludes with quite a long short story titled 'The Second Genesis' which is told in VI parts. And the author's writing style jumps a notch higher. There's a stark difference in the use of language and sentence structures, showcasing a tad bit more maturity in the writing.

The Epilogue is also a nicely written piece where we discover Arjun has taken up and continued the loving tradition of storytelling which his dad had started. With his arms around his own little son Adithya, they are peering at the night sky.

“Among the stars they lie,
Our loved ones, they never die
Spread your arms and fly,
Far, far away into the starlit sky.”

What a way to draw the curtains on the book, passing on the faith that our elders look down upon us from the stars!

Criticise this book if you must but as an author and a storyteller myself,  I like books that are simple and sweet at the crux and are written to instill hope, are designed to help us nurture bonds through our story-telling!

This review has been written at the express request of the author but I have tried to be very honest and remain unbiased in my opinions for the sake of our discerning readers.