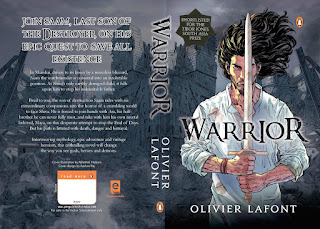 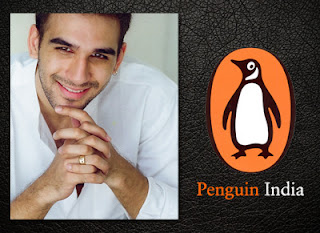 About the Author: Olivier Lafont is a French writer and actor of mixed origins who's presently based in Mumbai with his wife- Gina. He is also a successful screenplay writer who wrote the script for the award winning movie ‘Hari Om’ and regularly contributes editorial pieces to the men’s magazine- Man’s World. Olivier also acts in theater and English plays. He gives voice over in multiple languages.

There were three books already piled on my side table, calling me towards when this chunk of a hunk arrived by courier. What made me pick this book up and prefer to read it over the rest was undoubtedly the mention of 'Warrior' being shortlisted for the Tibor Jones South Asia Prize 2013. That told me I could expect some quality storytelling in the book. Besides that the delicious cover illustration done by Aashim Raj made it irresistible too. Then the third reason that this book shot to my priority list was the trivia that I learnt about the author's background. I clearly remembered that character from '3 idiots' who was obsessed with price tags. It was a pleasant surprise to discover that Kareena's on-screen fiance was also a thinking man besides being a handsome personality. Olivier Lafont and Penguin had successfully given me many compelling reasons to read 'Warrior'.

The story begins with the exchanges between a seemingly hapless watchmender on Marine Drive and a lunatic who is a regular feature in the area. "O papillary paroxysm! O salivary symphony!" the lunatic cries after tasting the sweets he'd snatched off the watchmender's counter. And before the fifth page I knew, this book was going to be a treat written in British English.

Within moments the city comes under the onslaught of a merciless blizzard and Saam, the watchmender is forced to shut shop. As Saam pedals his bicycle past BabulNath temple, he over hears "The lingam of Shiva  opened its eye!" Saam pedals through the snowstorm to Shivaji Park, then old Mahim (These are the areas I'd spent all of my childhood at) The author makes me nostalgic with his words, and I am enchanted by his keen eye for observation. His vivid descriptions build the scenes before the reader's eyes, clearly and meticulously.

The Peerless are a motley group of immortal demigods locked out of the heavens under the power of a covenant. "The End of Days is upon us!" Prophecies a self-proclaimed Master, claiming to be the originator of the havoc who also informs The Peerless that Shiva has begun the unravelling. It thus becomes inevitable that this dark force named 'The Enemy' who threatened obliteration be stopped. Progressively we read on and learn that Saam- the watchmender is no ordinary mortal but Shiva's only earthly demigod child, and it thus falls directly upon him to stop his indomitable father from letting the world reach its end. The story within the story of how Saam was born out of the love between the danseuse Padmini and Lord Shiva himself, has been skilfully crafted and is pivotal to the whole tale of the 'warrior'.

Bred to war, Saam sets off on a mission to first track down The Enemy and thus put a stop to the destruction of the world. On this mission Saam is forced to join hands with Ara- his half-brother whom he can never fully trust. Now Ara is one character who I really liked and believe the author has developed as beautifully as Saam. I was absolutely amazed at the brilliant twist in the tale that appeared nearing the end of the book. Isn't it just wonderful when a story is highly unpredictable? The reader stays hooked till the very end.

Saam is a demi-god who's sucked into the vortex of an epic mission to save the world where his path is littered with death, danger and betrayal. Being an immortal, Saam has lived over centuries and the author has superbly woven history into the fabric of the tale. Saam and his many dalliances pepper the book with love stories, which are told in flashback.However it is Maya- his present mortal companion who finally manages to steal Saam's heart and keep it for herself, for good!

Saam's journey into the Serpent kingdom, the discovery of the Kaal Veda puts them on the quest of the 'Pure Glass'. Saam and his six companions riding the enchanted horses travel the multiverse, in the Ship of Worlds are all epic adventures. How Einstein and his theories, the Geeta, the Kaurava-Pandava war have been flawlessly used as reference points to give a plausible foundation to a fiction story, left me in awe of the authors creativity and imagination.

The interaction between Saam and his father at the end of the book is a master stroke by the author. This enthralling novel requires a level of intelligence to understand and appreciate the beauty in the multiple layers of the story. There are subtle hints towards our real world politics, and religious divides too. Even though I wasn't able to devote time to read this book at length, every new chapter presented a new angle, a new thread of thought to mull on. As I finished reading the very last page of this book, I realised how much this author has observed and realised that women can gorge on chocolates even at the end of the most harrowing experience of their lives.

This is one book I am sure I will revisit again, later some time. And until then I will  flaunt it on the top shelf of my home library.This book is a superb amalgamation of Mythological fiction and Sci-Fi, reconfirming the belief that those books that one cannot classify under one particular genre turn out to be the best reads. All in all a fantastic book indeed, proudly added to my private collection of books I've read and reviewed!