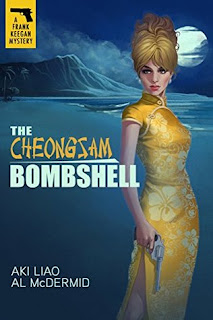 
Publisher: Red Betsy Press
My Rating: ****
About the Authors:

Al McDermid was born in Michigan, where he spent most of his life until joining the U.S. Navy upon graduating high school. Remaining in Hawaii when his tour ended, he attended the University of Hawaii at Manoa, where he graduated Phi Beta Kappa, receiving his B.A. (1990) and M.A. (1997) in History.

Their debut novel penned together- 'A Halo for Red Betsy' is the first book in this 'Frank Keegan Mystery' Series.

The author-Al McDermid, now my virtual friend, sent me a Proof copy of this wonderful book sailing across the seas to me. I am hugely thankful not only because the author has been extremely generous in pampering the voracious reader in me (twice over) but also because there are so many things about this book that I connect with.
'Cheongsam'- this piece of Chinese garment is my personal favourite style of clothing and who knew it would feature on a book cover and in a mystery book series title some day. So that's one major reason why I was attracted to this book.
Then the cover is once again beautifully hand-illustrated by Mark Anthony Taduran. Like book #1, I give another +1 * especially for the amazing book cover.
And the last but not the least reason that made me sit up and take interest in the mystery story was that Chapter One opens dated Sunday 25 December 1949. Christmas has a special place in my heart because its my birthday!!!
So with all these elements raising all my hopes and expectations from the book #2 in the Frank Keegan Mystery series, I must say that it did not fail me as a reader at all.
Try as I might, I cannot stop myself from referring to the previous book in the series and comparing between the two books- #1 A Halo for Red Betsy & #2 The Cheongsam Bombshell. However I still cannot decide which I like better for each comes with its own flavour and page-turning intrigue.

The previous book had a slew of characters, each more interesting than the other, each etched more creatively than the other. The main protagonist- U.S. Navy Gunner's Mate and former San Diego Police detective Frank Keegan found himself unexpectedly involved in solving the murder of Navy Lieutenant Elizabeth "Betsy" Vale.  By the end of book #1, right after Frank Keegan, I was drawn and enamoured by one particular not-so-ladylike lady in the book- Julie Flynn. I had a hunch that the foul-mouthed young hooker who was apparently a less important character in the story, could easily keep the readers mesmerised if developed into a full blown central protagonist. And like they'd read my mind, Al McDermid and Aki Liao brought out book #2 of The Frank Keegan Mystery with my favourite character in the spotlight.

Julie Flynn has given up her raunchy lifestyle as a taxi-dancer. Still clad in her trademark Cheongsams that accentuate the curves on her body, Julie with her height,good looks and brook-no-bullshit attitude made for the perfect bartender at 'The Golden Lotus'. Just as she was getting comfortable in this new role, and also as Frank Keegan's steady girlfriend, Julie's estranged grifter mother-Elsa shows up out of the blue on Christmas Day. The very next day Elsa is found murdered in her hotel room and Julie inadvertently being the only witness to the crime is first attacked, and then framed for murder. Frank has to keep the head-strong girl under wraps while clearing her name. His efforts take him from the seedy world of Honolulu’s Chinatown to the home of one the island’s wealthy patriarchs, who may be shipping contraband arms to Communist rebels in the Philippines.

The Cheongsam Bombshell is also a fast paced and kind of racy murder mystery. The storytelling transports you to a very different world in Hawaii. If you are not able to build mental pictures of the locales, if you haven't watched enough of the Hollywood cop movies for reference then you just got to log onto the Facebook page launched for Red Betsy Press and feast your eyes on some gorgeous B/w images. Such is social media, a boon for the authors and their readers!

What I have come to enjoy the most about the pennings of this author duo is the language used in the dialogues. It has an old world quality to it that definitely brings to the readers the quintessential flavour of the 40s'. Frank Keegan is an ex- Naval officer and the whole book is spiced with the lingo, probably used by the officers in those days. Not once do the authors let the present century slip into the storytelling and that is quite a feat! Also I have heard a lot of authors discuss how the first person POV is a difficult style to adopt for narrating an entire novel. I think, Aki Liao and Al McDermid seem to have pulled it off pretty neatly. They have not only employed a challenging style of narration but also maintained it, flawlessly, through both the books.

The one and only downside of this particular book#2 is the sort of loose editing that has let more than many typographical errors slip in for eg. Officer Schultz is spelt as Shultz in many portions of the book. However that is something one can easily get corrected in the following edition, right?

By the time Elsa Flynn's murderer is revealed, there's an even more scintillating character gracing the scene. Is Frank game to play along with Carmen Devereaux, the patriarch's unstable, power-hungry  daughter and does it flourish into a steamy love triangle? Is there going to be a jilting end again to this book too? Will Frank Keegan once again find himself drowning his days in tequila, aboard his boat?

I do hope this author duo has the book #3 ready and waiting to roll, soon!

As per Good Reads, 'The Cheongsam Bombshell' is the 'least popular' book on my list of books read in 2015. I'd like to correct that title by calling this book as a 'Lesser Known' book on the shelf. I'm sure if given the right spotlight, this Bombshell can  make a lot of noise. And I already want to read more of the Frank Keegan Mystery.
Kudos to the authors and
BOOKMARK this please, all you murder mystery fans!
A Frank Keegan Mystery Book Cover design Book review Books Chinese fiction first reads GoodReads Hawaii Historical fiction illustrations Murder murder mystery