Tuesdays with Morrie- An Inspirational Non-fiction 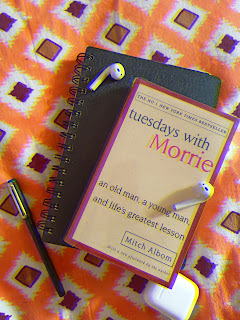 Book Title: Tuesdays With Morrie
Author: Mitch Albom
Publishers: Hachette India
My Rating: *****
About the Author: Mitchell David Albom is an author, journalist, screenwriter, playwright, radio and television broadcaster and musician.
Mitch Albom the author begins visiting his aged college professor, Morrie Schwartz who is terminally ill. Every Tuesday he flies to meet the dying sociology professor and records all that the old man has to share. I am so thankful to the young man and to the old man for sharing life's greatest lessons through this memoir. This is one non-fictional book that I found greatly inspirational.
One would think that a dying man's memoir would be greatly melancholic and depressing. The topic of death is always scary and causes anxiety to most of us, but this book is anything but that! Morrie is a cheery professor, greatly energetic despite his failing health and so intent on proving that 'dying' doesn't mean 'useless'. Impending death has only inspired the old man into meeting with Mitch, Tuesday after Tuesday for the sole purpose of sharing some very good insights on the most important aspects of life- the part before death that we forget to live in the true sense.
"After the funeral, my life changed. I felt as if time were suddenly precious, water going down an open drain, and I couldn't move quickly enough." Mitch Albom narrates how the death of his uncle had had a life-changing effect on him. This incident happened before the Tuesdays with Morrie began.
This did happen to me too!
I was just a teenager when my mother was diagnosed as terminally ill. Even though I was aware that we were on the verge of losing mum, my father and I were in denial.  I'd been recommended this book then, but my teenage mind was already so marred by the impending loss of my beloved mother, that I balked at the thought of reading an entire book on the topic. Little did I know that Tuesdays with Morrie had the power to give me a paradigm shift! Had I known that such beautiful thoughts had been shared here, I would have read it word to word. Then I'd have been more equipped to give my mother much better company, during the final year of her life. Maybe, if I'd shared Morrie's views on 'dying' with her, it would have changed her point of view too. (You should also read his views on regret!)
" Dying is only one thing to be sad over, Mitch. Living unhappily is something else."
There are so many profound thoughts throughout the book like this one.
One passage resonated deeply.
" Life is a series of pulls back and forth. You want to do one thing, but you are bound to do something else. You take certain things for granted even when you know you shouldn't. A tension of opposites, like a pull on a rubber band. And most of us live somewhere in the middle."
" So which side wins?" Mitch asks.
"Love wins. Love always wins."
On one of the Tuesdays while talking about the world Morrie says, "The most important thing in life is to learn to how to give out love and let it come in."
I fully completely agree with this one true statement.
So this is my personal takeaway from this fantastic book, which I feel is the greatest truth at the crux of it all, and also at the end of it all!
This post has been written as an entry for the contest organised by Solanki Booksellers, Pune.
I'd read the e-book finally in 2015 long after my mother's demise in 2003, but purchased it only recently on Mr. Solanki's recommendations from his fantabulous book shop. Gratitude!
Inspirational stories memoirs non-fiction